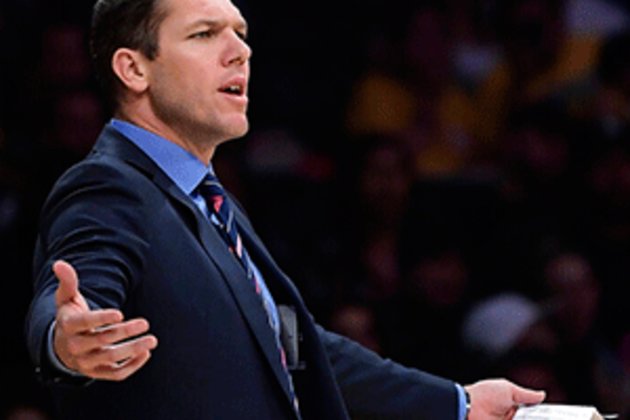 Los Angeles - The Los Angeles Lakers continued their clearout after a disastrous first season following the arrival of LeBron James by terminating the contract of head coach Luke Walton on Friday.

The club said they had mutually agreed to part ways.

"We would like to thank Luke for his dedicated service over the last three years," said general manager Rob Pelinka. "We wish Luke and his family the best of luck moving forward."

Walton, a former Lakers player, had been coach since 2016, building a 98-148 won loss record. The Lakers have failed to reach the playoffs for the last three seasons.

"I want to thank Jeanie Buss and the Buss family for giving me the opportunity to coach the Lakers," said Walton. "This franchise and the city will always be special to me and my family."

On Tuesday, Magic Johnson plunged the Lakers into further crisis when he surprisingly quit his post as president. Johnson was reportedly unhappy at the prospect of firing Walton.

Despite the addition of future hall of famer James 10 months ago, the Lakers went 37-45 in what was another embarrassing losing season for the once-storied NBA franchise.

Los Angeles was 20-14 when James suffered a groin injury during a Christmas Day win over the champion Golden State Warriors - and it was downhill from there.

"I feel for Luke. He was dependent on circumstances just like all of us .... We got wonderful people stabilizing our organization every day. I am lucky to be in this position and to be surrounded by these people. It doesn't happen often in the NBA."

What was supposed to be a revival story turned into a season-long nightmare that saw the losses and injuries pile up and eventually led to the club sitting star players like a healthy James down the stretch in a desperate attempt to secure a better pick at the summer entry draft. The team used more than 25 different starting lineups this season.

But even that strategy isn't a sure thing as tanking became such a big problem that the NBA was forced to bring in a lottery system to determine the order of the top draft picks.

The Lakers will not only be hunting for a new coach but also a big-ticket free agent as a right-hand man to James. All-star Kevin Durant, Kawhi Leonard and Kyrie Irving top the list of possible targets when free agency begins July 1.

The Lakers are the fourth NBA franchise to unload their coach since the end of the regular season on Wednesday, following Memphis, Sacramento and James's former team Cleveland.

Among the candidates for the Lakers' job is Tyronn Lue, who coached James in Cleveland, and Philadelphia 76ers assistant Monty Williams.

"I liked playing for him," Lakers guard Josh Hart said. "He's a player's coach. Lets you kind of play your game, play with passion, so it was fun to play for him. I think he'll get another job fairly quickly."

Walton may not be unemployed for long as the Sacramento Kings are reportedly interested in interviewing him for their vacant post.