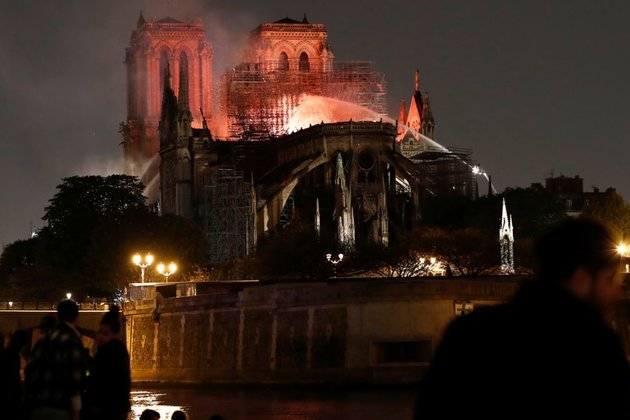 A fire has caused massive damage to the famed Notre Dame Cathedral in central Paris, but firefighters say they have saved the buildings two iconic towers.

Paris fire brigade chief Jean-Claude Gallet told reporters outside the cathedral Monday night that the main structure of Notre Dame has been saved and preserved.' He said one firefighter was seriously injured trying to put out the huge blaze in the French capital.

The flames, which at one point burned upwards of 10 meters into the air, destroyed the cathedrals entire roof and caused its spire to collapse.

A cathedral spokesman, Andre Finot, told French media earlier Monday that the entire wooden interior of the cathedral is likely to be destroyed.

Mayor Anne Hidalgo said the significant collection of art work and holy objects kept inside the church have been recovered.

About 400 firefighters used water hoses to battle the blaze into the night.

Thousands of onlookers lined bridges over the River Seine to watch the scene and others gathered at the nearby Saint Julien Les Pauvres to sing hymns and say prayers.

It is not clear what caused the blaze, although French media reported that fire officials said the blaze could be 'potentially linked' to renovation work being done at the building.

Several sections of the building had been under scaffolding and officials say bronze statues were removed last week for the renovation.

French President Emmanuel Macron tweeted, 'Like all our compatriots, I am sad this evening to see this part of all of us burn.' He canceled a planned policy address to the nation and visited the scene of the blaze.

The Paris prosecutor's office said it had launched an inquiry into the fire.

Firefighters in Paris evacuated buildings nearby Notre Dame and cleared the area around the cathedral as ash fell over the surrounding blocks.

Witnesses said firetrucks sped to the area after the fire broke out shortly before 7 p.m. local time. Hundreds of people gathered on Paris' bridges over the Seine River to watch the scene.

U.S. President Donald Trump tweeted, 'So horrible to watch the massive fire at Notre Dame Cathedral in Paris. Perhaps flying water tankers could be used to put it out. Must act quickly!'

U.S. first lady Melania Trump wrote on Twitter, 'My heart breaks for the people of Paris after seeing the fire at Notre Dame Cathedral. Praying for everyone's safety.'

The medieval Catholic cathedral is one of the most visited historical monuments in Europe, welcoming millions of people each year. It dates to the 12th century and is famous for featuring in Victor Hugo's classic novel, 'The Hunchback of Notre-Dame.'

Situated on the Ile de la Cite, an island in the River Seine, the building is known for its stone gargoyles, stained glass windows and the iconic flying buttresses that hold up its walls.