U.S. government non-emergency personnel ordered to get out of Iraq 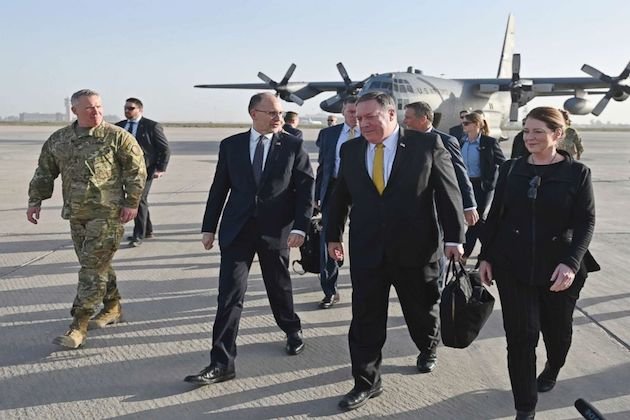 <p>BAGHDAD, Iraq -&nbsp;The United States on Wednesday ordered all non-emergency government employees to leave Iraq immediately.</p><p>&quot;@StateDept has ordered the departure of non-emergency USG employees from Iraq, both at the Embassy in Baghdad and Consulate in Erbil,&quot; the US Embassy in Baghdad tweeted.</p><p>In a statement, the Embassy said Washington has &quot;limited ability to provide emergency services to the US citizens in Iraq.&quot;</p><p>&quot;Normal visa services at both posts in Iraq and Erbil will be temporarily suspended,&quot; it added.</p><p>The decision came amid reports of rising tensions in the Middle East after the Trump administration warned of potential threats against American forces in the region from Iran or Iranian-backed proxies, the Voice of America reported.</p><p>Last week, the U.S. deployed an aircraft carrier and nuclear-capable bomber planes to the Persian Gulf, with a Patriot missile battery and an amphibious warship on the way. The Patriot system offers protection from aircraft and missiles, while the warship carries Marines and the aircraft, hovercraft, or boats needed to put them ashore to fight in distant places.</p><p>Meanwhile, President Donald Trump on Tuesday rejected a report that he is considering sending 120,000 troops to counter Iran, but did not rule out deploying &quot;a lot more&quot; soldiers in the future.</p><p>The move also comes after U.S. Secretary of State Michael R Pompeo paid a surprise visit to Baghdad last week after abruptly cancelling a scheduled trip to Germany citing &quot;pressing issues.&quot; According to CNN, Pompeo met Prime Minister Adil Abd al-Mahdi, President Barham Salih and other senior officials in his four-hour visit to the country.</p><p>Shortly after his meeting in Baghdad, Pompeo said that he deliberated officials about the &quot;importance of Iraq ensuring that it&#39;s able to adequately protect Americans in their country.&quot;&quot;They both provided assurances that they understood that was their responsibility,&quot; he said.</p><p>&quot;They understood too it&#39;s important for their country. We don&#39;t want anyone interfering in their country, certainly not by attacking another nation inside of Iraq and there was complete agreement,&quot; the top US diplomat said while making a veiled reference to Iran. (ANI)</p>

Coronavirus has had an unprecedented impact on pubs in Britain. The British Beer and Pub Association estimates that the industry ...

NEW DELHI, India, July 3 (ANI): The ban on international commercial passenger flights to and from India has been extended ...

SYDNEY, Australia - Stocks in Asia extended gains on Friday as strong payrolls data out of the U.S. and a ...

Axis Bank to wind down and close operations in Britain

MUMBAI, Maharashtra, India - Private sector lender Axis Bank is fully winding down and closing operations of its subsidiary in ...

Sonalika confirmed as No. 1 exporter of tractors in India

HOSHIARPUR, Punjab, India - Not only has the company set the pace, it has reported its highest monthly sales ever. ...

WASHINGTON, DC - The U.S. government has filed a forfeiture complaint and warrant against four Iranian vessels travelling to Venezuela ...

Some 120,000 members of the U.S. National Guard have responded this year to natural disasters - floods in Michigan, wildfires ...

WASHINGTON, DC - Amid plummeting poll numbers and mounting pressure over his handling of the pandemic, Black Lives Matter protests ...

On June 13, President Donald Trump told the graduating class at West Point, "We are ending the era of endless ...

India's Navy repatriates 687 citizens who were stranded in Iran

CANBERRA, Australia - We now know just how massive the fastest-growing black hole in the universe actually is, as well ...