Mobs in Myanmar threaten Muslims wanting to worship during Ramadan 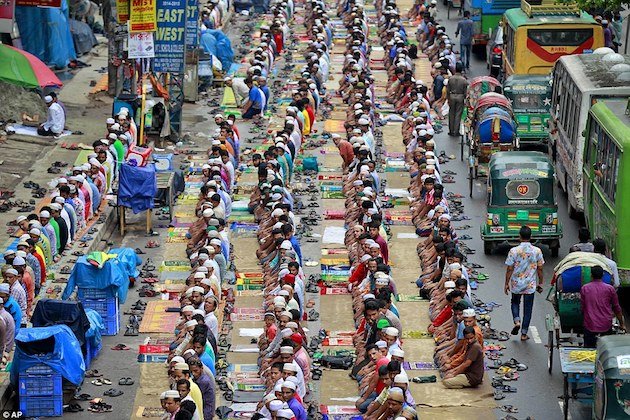 <p>YANGON, Myanmar - Mobs are forcing government authorities in Myanmar to restrict Muslims from worshipping during the holy month of Ramadan.</p><p>Temporary houses and structures, set up as makeshift mosques, have had to be shut down amidst threats by mobs, forcing Muslims to pray in the streets, for which they could be arrested.</p><p>The leader of Myanmar&#39;s Muslim community on Thursday called on the government to protect Muslims&#39; religious rights.</p><p>This came after a group of around 200 people on Wednesday night surrounded one of three houses, designated as temporary places of worship for Ramadan in Yangon&rsquo;s South Dagon town by regional authorities, demanding the building be closed.&nbsp;</p><p>After a request from local municipal officials, Muslim residents agreed to close all three places of worship the same night in an effort to avoid further tension.</p><p>&quot;As the mob threatened potential attacks, the township administrator and police requested Muslim residents to agree on the closure,&quot; regional official U Nyi Nyi told <a href="https://www.aa.com.tr/en/asia-pacific/myanmar-muslims-decry-closure-of-places-of-worship/1479833">Anadolu Agency</a> by phone on Thursday.</p><p>He said the regional government had only allowed 3 out of fifteen houses to be used as temporary religious facilities during Ramadan, which began on May 6. Wunna Shwe, Secretary General of the Islamic Religious Affairs Council, demanded the government protect Muslims&#39; basic rights during the holy month.</p><p>&quot;Muslims there don&rsquo;t even have a single place for worship,&quot; he told Anadolu Agency on Thursday.&quot; Authorities should protect them instead of pleasing the rioters,&quot; he added.</p><p>Myanmar has a long history of preventing Muslims from worshipping during Ramadan. Authorities have even <a href="https://www.nst.com.my/world/2017/06/245247/myanmar-sues-muslims-conducting-ramadan-prayers-street">arrested Muslims</a> for praying in the street because they have nowhere to go and worship.</p><p>&nbsp;</p>

ATLANTIC CITY, New Jersey: America's casinos announced that they had matched their best-ever earnings during the first quarter of 2021. ...

SYDNEY, NSW, Australia - Stocks in Asia ended the week on a positive note, with all the major indices rising ...

WASHINGTON D.C.: The U.S. House of Representatives is seeking solutions to reduce the $10 billion annual loss suffered by the ...

Amazon $1 billion bond to be used for climate, social causes

All U.S. residents age 12 and up to be eligible for Covid vaccinations

WASHINGTON D.C.: As the rate of Covid infections continues to decline in the United States, regulators have approved the use ...

Biden warns unemployed that they will lose benefits if not working

WASHINGTON D.C.: Amid criticism that the generous COVID-19 unemployment benefits rolled out in March are keeping Americans from accepting new ...

TBILISI, Georgia: Opposition leader Nika Melia was released from jail this week. Melia's jailing had been seen as a largely ...

SACRAMENTO, California: California has expanded a drought emergency to 41 of 58 counties covering 12 million residents, some 30 percent ...

TALLAHASSEE, Florida - To reduce the spread of diseases, such as dengue, yellow fever and the Zika virus, genetically modified ...

DETROIT, Michigan: Acting on the request of federal regulators in the United States, American automaker Ford Motor will recall 661,000 ...