San Francisco, October 8, 2019: Latest study by Grand View Research, Inc. titled "Electrophysiology Devices Market Size, Share & Trends Analysis By Application (Treatment, Diagnostic), By Indication (AF, SVT, AVNRT, WPW), By End Use, By Region, And Segment Forecasts, 2019 - 2026", reveals that the global electrophysiology devices market size is expected to reach USD 12.2 billion by 2026, according to a new report by Grand View Research, Inc. expanding at a CAGR of 11.70% over the forecast period. The demand for electrophysiology devices is expected to increase owing to growing old age population and frequent cardiac arrhythmias incidents. Adoption of ablation and diagnostics techniques among physicians has resulted in increased usage of the product in the past few years and is likely to drive market growth. Development of new devices such as Nanostim-dual-chamber leadless pacemaker is also anticipated to fuel demand in the market. 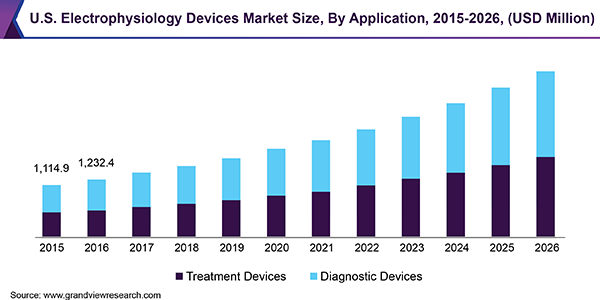 Some key findings from the report:

- Electrophysiology diagnostic devices held a major share in the application segment in 2018. Collectively, cardiac monitors held the largest market share in electrophysiology diagnostic segment. The devices include Holter monitors, ECG monitors, and Insertable Cardiac Monitors (ICM). Growth can be attributed to increasing usage of digital and portable systems in the ambulatory setting and improving diagnostic interventional capabilities of healthcare consultants.

- EP mapping and imaging systems are anticipated to grow rapidly during the forecast period. Technological improvements such as Optima IGS 320 and GE Healthcare's Innova IGS 520 are projected to provide future opportunities for growth. These are dose efficient products and cardiac imaging systems that allow interventional cardiologist to perform compound interventional procedures with accuracy and ease.

- Electrophysiology treatment devices include pacemakers, implantable cardioverter defibrillators (ICD) and catheters. Pacemakers emerged as the largest treatment devices segment in 2018 owing to rising prevalence of different types of arrhythmia among the population and extensive usage of cardiac rhythm management devices. However, rising costs related to the product, existence of strict regulations and accessibility of substitute therapies are anticipated to hamper the growth. Automated external defibrillators (AEDs) are expected to witness high growth rate during the forecast period attributed to increasing use in treating out-of-hospital cases of cardiac arrest.

- North America held the largest market share in 2018 owing to a high patient base of cardiac arrhythmia resulting from unhealthy lifestyle habits. Increasing demand for the latest healthcare infrastructure and rising consumer awareness are anticipated to propel growth.

- Asia-Pacific is a lucrative market owing to the high rate of unmet medical requirements leading to an increase in the number of patients. Rapid developments in healthcare infrastructure and increase in disposable income in emerging economies such as India and China are expected to provide new avenues and opportunities for companies to capitalize over the forecast period.

The final report on global electrophysiology devices market has been segmented on the basis of medical condition, service and region:

Cardiac ablation has gained popularity as the first-line treatment, rendering a 95% success rate for several rhythm disorders and is anticipated to be a key driving factor for growth. Diagnostic electrophysiology catheters are estimated to grow at high CAGR in the foreseeable future. Technological developments such as laser ablation, cryo-ablation, and ultrasound ablation, coupled with optimized mapping techniques are anticipated to augment market growth over the forecast period.

SYDNEY, Australia - Wall Street took a breather on Thursday following more than a week of protests across the U.S., ...

ROME, Italy - Global food commodity prices fell for the fourth consecutive month in May as the coronavirus (COVID-19) epidemic ...

SYDNEY, Australia - Stocks in Asia advanced on Thursday but gains were limited, and not universal.China's Shanghai Composite finished flat.The ...

75% of consumers in UK, Australia and U.S. slam Chinese government

LONDON, UK - More than 75% of consumers in the UK, US and Australia blame the Chinese government for the ...

JERUSALEM - The only Palestinian industrial area in East Jerusalem is to be demolished, and the present occupiers of the ...

HOUSTON, Texas - Over 60,000 people showed up for a Houston protest and rally in the wake of George Floyd's ...

LONDON, UK - Altaf Hussain, the founder and leader of the Muttahida Qaumi Movement (MQM), has appealed to the United ...