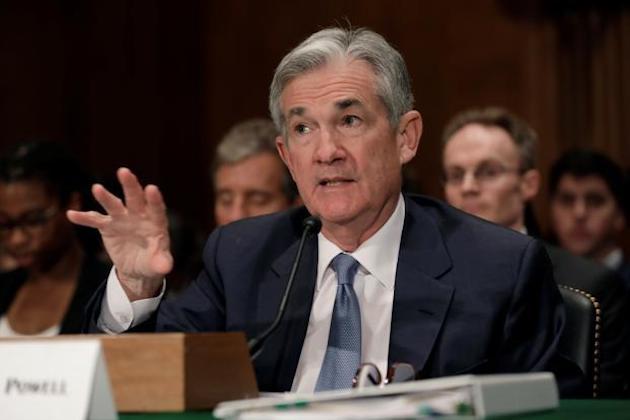 "The U.S. economy is now in the 11th year of expansion, and the baseline outlook remains favorable," Chairman Jerome Powell told the U.S. Congress House Committee on the Budget on Thursday.

"Gross domestic product increased at an annual pace of 1.9 percent in the third quarter of this year after rising at around a 2.5 percent rate last year and in the first half of this year. The moderate third-quarter reading is partly due to the transitory effect of the United Auto Workers strike at General Motors. But it also reflects weakness in business investment, which is being restrained by sluggish growth abroad and trade developments. These factors have also weighed on exports and manufacturing this year. In contrast, household consumption has continued to rise solidly, supported by a healthy job market, rising incomes, and favorable levels of consumer confidence. And reflecting the decline in mortgage rates since late 2018, residential investment turned up in the third quarter following an extended period of weakness."

"The unemployment rate was 3.6 percent in October, near a half-century low," said Powell. "The pace of job gains has eased this year but remains solid; we had expected some slowing after last year's strong pace. At the same time, participation in the labor force by people in their prime working years has been increasing. Ample job opportunities appear to have encouraged many people to join the workforce and others to remain in it. This is a very welcome development."

"The improvement in the jobs market in recent years has benefited a wide range of individuals and communities. Indeed, recent wage gains have been strongest for lower-paid workers. People who live and work in low- and middle-income communities tell us that many who have struggled to find work are now getting opportunities to add new and better chapters to their lives. Significant differences, however, persist across different groups of workers and different areas of the country: Unemployment rates for African Americans and Hispanics are still well above the jobless rates for whites and Asians, and the proportion of the people with a job is lower in rural communities."

"Inflation continues to run below the Federal Open Market Committee's (FOMC) symmetric 2 percent objective. The total price index for personal consumption expenditures (PCE) increased 1.3 percent over the 12 months ending in September, held down by declines in energy prices. Core PCE inflation, which excludes food and energy prices and tends to be a better indicator of future inflation, was 1.7 percent over the same period," said the U.S. Fed chairman.

"Looking ahead, my colleagues and I see a sustained expansion of economic activity, a strong labor market, and inflation near our symmetric 2 percent objective as most likely. This favorable baseline partly reflects the policy adjustments that we have made to provide support for the economy. However, noteworthy risks to this outlook remain. In particular, sluggish growth abroad and trade developments have weighed on the economy and pose ongoing risks. Moreover, inflation pressures remain muted, and indicators of longer-term inflation expectations are at the lower end of their historical ranges. Persistent below-target inflation could lead to an unwelcome downward slide in longer-term inflation expectations. We will continue to monitor these developments and assess their implications for U.S. economic activity and inflation."

Powell said the Federal Reserve continues to monitor risks to the financial system.

"Over the past year, the overall level of vulnerabilities facing the financial system has remained at a moderate level. Overall, investor appetite for risk appears to be within a normal range, although it is elevated in some asset classes. Debt loads of businesses are historically high, but the ratio of household borrowing to income is low relative to its pre-crisis level and has been gradually declining in recent years. The core of the financial sector appears resilient, with leverage low and funding risk limited relative to the levels of recent decades. At the end of this week, we will be releasing our third Financial Stability Report, which shares our detailed assessment of the resilience of the U.S. financial system," he said.