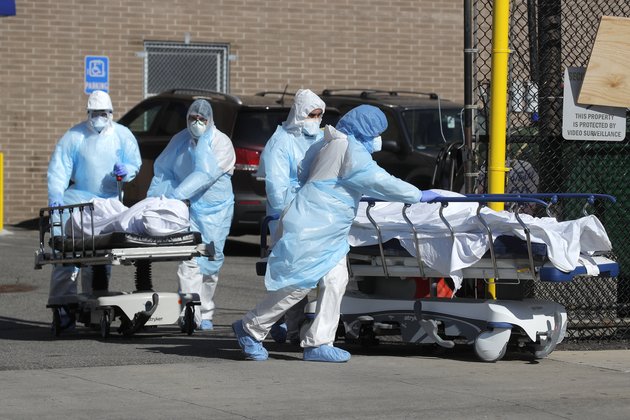 WHITE HOUSE - A computer model used by the White House projects close to 82,000 COVID-19 deaths in the United States by August 4, assuming the country implements full social distancing until the end of May.

The 81,766-death projection is a slightly less grim figure than the 93,531 cited earlier by the Trump administration. The model projects that the country may need fewer hospital beds, ventilators and other equipment than previously estimated, and that some states may reach their peak of COVID-19 deaths sooner than expected.

U.S. President Donald Trump, whose pandemic messaging has ranged from optimism that the country will "open up sooner rather than later" to frustration that "we're paying people not to go to work," has warned Americans to brace for the worst.

"This will be probably the toughest week, between this week and next week," Trump said on Sunday. "And there'll be a lot of death, unfortunately, but a lot less death than if this wasn't done. But there will be death."

Not all states are using the federal government's forecasting model. While the White House projects that coronavirus cases in the nation's capital would peak later this month, the local Washington, DC government is relying on a different computer model that says it won't peak until late June or early July.

In any case, health experts warn against early optimism and say it's best to prepare for worst case scenarios.

The numbers are sobering, but the talk helps both people and health professionals to think seriously about this issue, said William Schaffner, an infectious disease expert at the Vanderbilt University School of Medicine. "It helps us prepare psychologically for what's ahead," he added.

"There is a lot of uncertainty in the projections that we make because of lack of access to good data, because we just don't understand yet about the coronavirus, and especially because of uncertainty about how people will behave and what kinds of policies will be enacted to change contact patterns in the weeks and months ahead," Meyers said.

Meyers stressed that projections "are not like weather forecasts."

"When you forecast a tropical storm, there's nothing you can do about changing the path of the storm, but when you project that an infectious disease outbreak could lead to many, many deaths, there are actually measures you can take, things you can do, especially if you act early enough, that can change the course of the outbreak," Meyers said.

"The ranges that we estimated really depends on what we put into the model with respect to how much people actually adhere to social distancing," she added.

While the coronavirus has spread to almost the entire planet, not all countries have the tracking capacity, nor the political will to record cases accurately, which will directly impact the ability to come up with pandemic projections and how to prepare for it.

Daniel Runde, an international development analyst at the Center for Strategic and International Studies, urged countries to be transparent with their data and in their pandemic messaging.

South Korea was one of the worst-hit countries in the early stages of the pandemic, but has been praised for its effective, aggressive response, that includes a swift implementation of mass-scale testing, and consistent, transparent messaging to the public throughout the crisis.

"Lying about numbers, suppressing science, suppressing doctors, censoring the media -- this is the absolute wrong time to be doing that," Runde said.