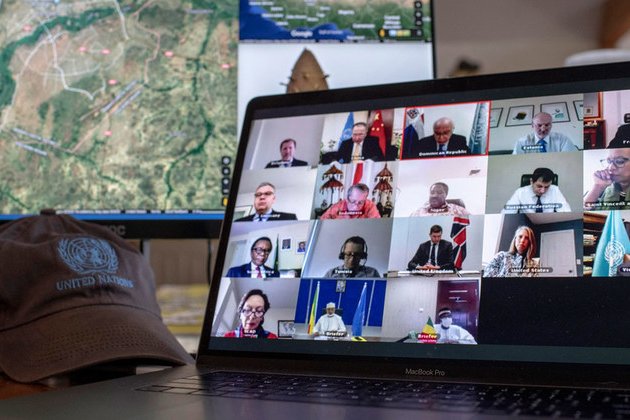 To date, Mali has recorded 46 positive COVID-19 cases, including one case within the UN mission, and five deaths.

"Despite these exceptional conditions, MINUSMA [the UN Stabilization Mission in Mali] continues to fulfill the mission entrusted", Special Representative and head of MINUSMA, Mahamat Saleh Annadif, said in an open videoconference to the Council.

He highlighted two priorities, namely the Implementation of the Agreement for Peace and Reconciliation and supporting the political framework for managing the crisis in the country's conflict-affected central region.

In implementing the Agreement, since February 2020, more than 1,000 elements have been deployed in Gao, Timbuktu, Kidal and Menaka as part of the first reconstituted Units of the Malian Defense and Security Forces in the North, according to the mission chief.

Among other things, he said that despite the kidnapping of the Leader of the Opposition and former presidential candidate, Soumaila Cisse, three days before the poll, the first round of legislative elections went off peacefully, and at the national level, the 30 per cent quota for women was fulfilled.

Turning to the central region MINUSMA continues to implement its adaptation plan.

"A total of 19 additional civilian staff have already been redeployed to Mopti, said Mr. Annadif, adding that as part of MINUSMA's efforts to respond to early warnings, "a hotline has been established in Mopti to serve the civilian population".

As the number of displaced increases - reaching 218,000 people in March, as compared to 199,385 last November - the UN envoy expressed hope that "concrete actions to fight impunity will be taken".

Meanwhile, MINUSMA continues to provide regional security support, and has begun construction on a Joint Force headquarters in Bamako.

Lastly, Mr. Annadif highlighted "the exemplary cooperation" that has been established between the UN system and the Government in the fight against the COVID-19 pandemic.

Readers can find information and guidance on the outbreak of the novel coronavirus (2019-nCoV) from the UN, World Health Organization and UN agencies here. For daily news updates from UN News, click here.

"Since 19 March, commercial flights to Mali have been suspended, group gatherings are prohibited, and a curfew has been introduced from 9 p.m. to 5 a.m.", he updated - all while MINUSMA and the Country Team continue to fulfill their mandates and comply with Government directives.

Complying with the Secretary-General's decision during the pandemic, the rotation of uniformed contingents has been suspended until 30 June, but exceptions may occur on a case-by-case basis, he said, noting that isolation periods and other virus prevention-spreading guidelines would be respected.

Mr. Annadif added that staff with medical conditions or those wishing to join their families have taken special Government-authorized flights requested by some embassies.

"As you can see, we face many challenges, including the safety and well-being of the whole UN family in Mali, but also have real hopes through the capacity for resilience of the Malian People", concluded the Special Representative.

For their part, the members of the Security Council expressed solidarity with Mali in the face of the COVID-19 pandemic and called on the Government and the UN to continue working together to prevent the virus from spreading and for MINUSMA to continue delivering on its mandate despite the pandemic, while ensuring the safety and security of its staff and peacekeepers.

They welcomed the progress made in implementing the Agreement so far while underlining that more is needed.

The Council encouraged the Government and the signatory armed groups to continue to accelerate the implementation and welcomed the conclusions of the national inclusive dialogue, which helped to achieve the results.

They condemned Monday's terrorist attack against the Malian Defense and Security Forces in Bamba, and expressed their condolences to Mali and to the victims' families and called for the swift liberation of Mr. Cisse.

Moreover, the called on the Government to work harder to stem violence in the Centre and ensure that all those responsible for violations and human rights abuses be brought to justice.