Evan Cooper's love of football fostered by his family and hometown 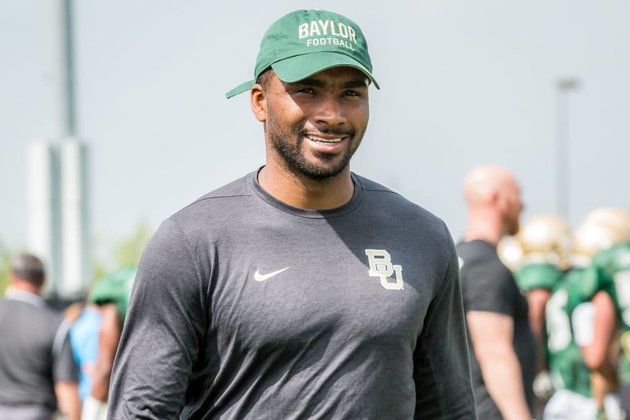 CHARLOTTE - Panthers cornerbacks coach Evan Cooper has loved football for as long as he can remember.

That's a common theme for many grew up in the football hotbed of South Florida like Cooper. But his family also has a lot to do with it.

His father, Evan Cooper Sr., was a star defensive back and returner at Michigan before the Eagles made him a fourth-round pick in 1984. The elder Cooper totaled six pro seasons with Philadelphia and Atlanta, finishing with 11 career interceptions.

Cooper Jr. played college football at Temple before becoming a coach. While the connection to the game between father and son may be obvious, the younger Cooper said his father is far from the only family member with strong football ties.

Not only is Cooper's grandmother, Margaret Axem, schooled on defensive coverages, but she'll also call her grandson with postgame critiques.

"I know a little bit," Axem said. "I just say, 'Your coverage wasn't quite straight,' or 'You weren't quite where you should've been' or something to that effect. The same goes for zone coverage or man-to-man. 'If you were in zone coverage, you were in the wrong area,' something like that."

Many football watchers can't tell the difference between zone or man coverage, so intentionally or not, Axem was downplaying her knowledge of the game.

"She would not ask why (a certain coverage was played), but she would say, 'Hey, I saw you playing man. He was trying to follow him around. I see what you're trying to do, but they caught it on him,'" Cooper said with a laugh.

Partnering those strong family ties with his upbringing in South Florida made Cooper love the game even more.

So once he finished his playing career at Temple, Cooper wanted to find a way to stay in the game as a coach. He did that at the high school level for a few years before heading back to Temple under head coach Matt Rhule.

Cooper was one of four new grad assistants during Rhule's first year with the Owls, and while Cooper put plenty of effort into it, he admitted he was "terrible" in the role.

"Our D-coordinator, coach (Phil) Snow, actually would say, 'Did you have this cut up?' And in the back of my mind, I'm like, 'Well, what is that? What exactly should I be doing right now?' I felt like it took me an entire year to actually realize I'm supposed to be doing so much more than I am. Coach (Rhule) called me in and said, 'You suck,' pretty much," Cooper recalled with a laugh.

Cooper managed to stick around the program as the director of external operations the next season. After a short stint at the University of Miami, he returned to Temple as the director of player personnel. He served in that same role for the first year of Rhule's tenure at Baylor before becoming assistant cornerbacks coach/recruiting coordinator in 2018.

So while Cooper may have been in a bit over his head as a graduate assistant, he stayed the course and figured out what he needed to do to succeed under Rhule.

"Working with Coach, you learn to expect what he expects, and you learn to cope with it and do it," Cooper said. "Being around Coach and his expectations makes you better, so I would like to think that I've grown under his leadership."

And now Cooper has established himself enough to earn a role as a position coach at the highest level. While he hasn't yet performed the job with players in person, it was a thrill for him to help in the scouting and drafting process. A self-described draft nerd, Cooper has been closely following the event since he was 7.

"It's just really cool to be on that side of it, go to the Combine and have my assessment ... be for something. It's like, OK, I watched him and now we have him. So that was very exciting."

But that's part of being an NFL assistant coach. And while there's plenty of time before Cooper puts on the headset for his first game in the pros, this already feels special.

"Just for me to be at the highest level means something to me. It's been a dream of mine since I started coaching and started knowing what I wanted to do, so that part is really cool," Cooper said. "But I try not to get caught up in that because there's still a job at hand."

And while Axem won't hesitate to pick up the phone to criticize, she's proud of what her grandson has accomplished so far.

"Evan is very bright, and if he puts his mind to it, he can do anything," she said. "The sky is the limit, but you've got to go for it.

"I'm hoping one day, he'll make it to a head coaching position, too."

3,000 miles. 43 days. Two rowers. One boat.That was the challenge that Anna and Cameron McLean set themselves by taking ...

Former World Wrestling Entertainment star Dwayne "The Rock" Johnson has reportedly teamed up with an investment firm to purchase the ...

WASHINGTON, DC - The U.S. Securities and Exchange Commission said Friday that Bausch Health, a multinational pharmaceutical company based in ...

DUBLIN, Ireland - Good news for the tourism industry in Ireland. A total of twenty-six airlines have now resumed operations ...

Three people including a minor face charges over Twitter attack

SAN FRANCISCO, California - Three people, including a teenager and a juvenile, were charged on Friday for their alleged roles ...

Trump orders agencies to employ Americans ahead of foreigners

WASHINGTON, DC - President Donald Trump said Monday that he had fired the chair of the Tennessee Valley Authority, criticizing ...

Tensions between the United States and China are rising as the U.S. election nears, with tit-for-tat consulate closures, new U.S. ...

Prison in eastern Afghanistan under ferocious attack by ISIS fighters

KABUL, Afghanistan - An attack on a prison in eastern Afghanistan by ISIS fighters which began on Sunday has continued ...

The seven Marines and sailor missing after their amphibious assault vehicle sank off the California coast are presumed dead as ...

WASHINGTON, DC - U.S. President Donald Trump is banning the use of the TikTok app, widely used by Americans particularly ...

MEXICO CITY, Mexico - Mexico has recorded more coronavirus-related deaths than the UK, and as the figure rose above 47,000 ...