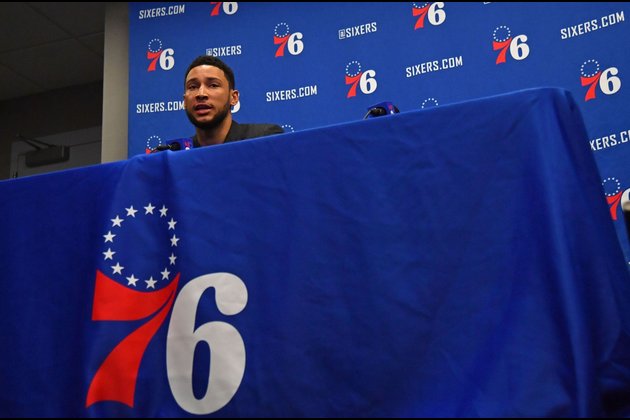 Philadelphia 76ers point guard Ben Simmons is "good to go" when the NBA resumes the 2019-2020 season later this month.

Head coach Brett Brown said Simmons, who last played in a game on Feb. 22 because of a pinched nerve in his back, is ready to play now.

"He's put in a tremendous amount of work for me to be able to confidently say that," Brown said on a conference call with reporters Wednesday afternoon.

"As you search for silver linings with this pandemic and the way things have shaped up, it would be hard-pressed for me to find something more obvious than this: It's enabled Ben to reclaim his health. He's good to go, and we look forward to watching him with what I'm told is effectively 100 percent health."

The Sixers play their first game since March 11 on Aug. 1 against the Indiana Pacers.

"There is nobody on our team that has put in more time than Joel Embiid," Brown said. "Forget what he has actually done in the gym for a minute, just go to the man hours and consecutive days and the amount of days he has put in over the past few months. I'm proud of him, I respect him. He needed to do it. We understand the impact he can have on our team.

"... I'm looking for Joel to come in in as good of shape as he's been in since I have coached him. I think the three weeks we have together is an inverted sort of luxury we haven't had. I'm excited for Jo to get back into this and show what he has been doing the last few months."

3,000 miles. 43 days. Two rowers. One boat.That was the challenge that Anna and Cameron McLean set themselves by taking ...

Former World Wrestling Entertainment star Dwayne "The Rock" Johnson has reportedly teamed up with an investment firm to purchase the ...

WASHINGTON, DC - The U.S. Securities and Exchange Commission said Friday that Bausch Health, a multinational pharmaceutical company based in ...

DUBLIN, Ireland - Good news for the tourism industry in Ireland. A total of twenty-six airlines have now resumed operations ...

Three people including a minor face charges over Twitter attack

SAN FRANCISCO, California - Three people, including a teenager and a juvenile, were charged on Friday for their alleged roles ...

Trump orders agencies to employ Americans ahead of foreigners

WASHINGTON, DC - President Donald Trump said Monday that he had fired the chair of the Tennessee Valley Authority, criticizing ...

Tensions between the United States and China are rising as the U.S. election nears, with tit-for-tat consulate closures, new U.S. ...

Prison in eastern Afghanistan under ferocious attack by ISIS fighters

KABUL, Afghanistan - An attack on a prison in eastern Afghanistan by ISIS fighters which began on Sunday has continued ...

The seven Marines and sailor missing after their amphibious assault vehicle sank off the California coast are presumed dead as ...

WASHINGTON, DC - U.S. President Donald Trump is banning the use of the TikTok app, widely used by Americans particularly ...

MEXICO CITY, Mexico - Mexico has recorded more coronavirus-related deaths than the UK, and as the figure rose above 47,000 ...