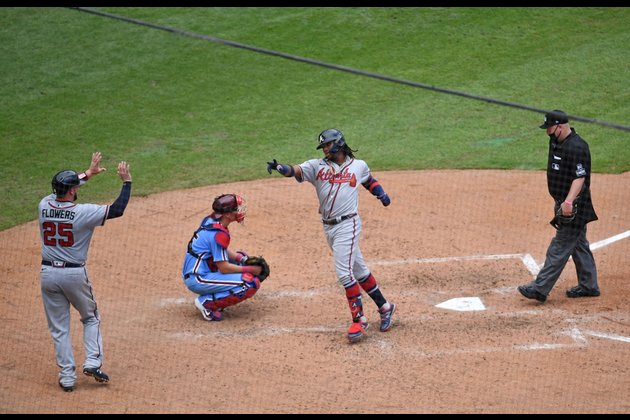 Ronald Acuna Jr. homered and drove in two runs to lift the visiting Atlanta Braves to a 5-2 victory over the Philadelphia Phillies in the first game of a doubleheader on Sunday.

Adam Duvall doubled, singled and knocked in three runs while Freddie Freeman added three hits for the Braves. Freeman, who went 0-for-4 on Saturday and had his average dip to .200, recorded his 119th career three-hit game.

The Braves sent Huascar Ynoa to the mound for his third career appearance in what was deemed a bullpen start. Ynoa lasted only 2 1/3 innings and allowed one hit and one run.

Atlanta southpaw Tyler Matzek (2-0) earned the win in relief and Mark Melancon tossed a scoreless seventh for his third save in three opportunities.

Andrew McCutchen had two RBIs for the Phillies, who earned six walks but managed only two hits.

Phillies starter Vince Velasquez tossed four-plus innings and gave up three hits and one run while striking out six and walking three. Deolis Guerra (1-1) picked up the loss in relief.

The Braves loaded the bases with two outs in the second inning but Ender Inciarte grounded out to second to end the threat.

The Phillies went ahead 1-0 in the third when McCutchen broke his bat and grounded out but was able to score Neil Walker from third.

In the fifth, Acuna laced a two-run home run to left off Guerra for a 2-1 Braves advantage. Acuna had been hitless in 10 straight at-bats before the homer. Duvall eventually added a bases-clearing, pinch-hit double to left off Adam Morgan and the Braves extended their lead to 5-1.

Philadelphia closed within 5-2 in the fifth when McCutchen hit a sacrifice fly to center, scoring Roman Quinn. Didi Gregorius later came up with two runners on and two outs but popped out to first against Will Smith.

J.T. Realmuto grounded out to open the seventh, McCutchen singled and Rhys Hoskins lined out to third. Bryce Harper flied out to left to end the game.