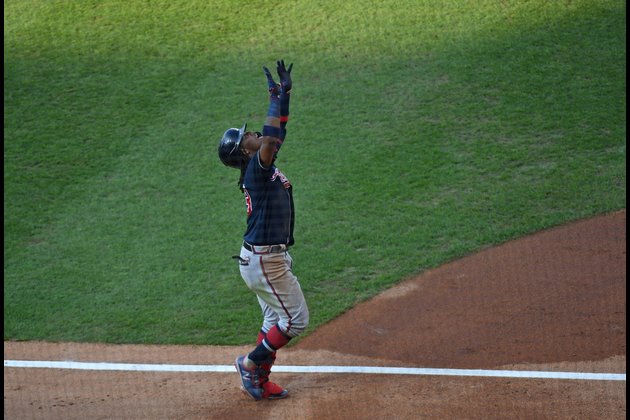 Ronald Acuna Jr. had four hits, including two home runs, and drove in three runs as the visiting Atlanta Braves completed a doubleheader sweep of the Philadelphia Phillies on Sunday, 8-0.

The Braves won the opening game 5-2.

Freddie Freeman homered, doubled, tripled and knocked in three runs while Travis d'Arnaud and Marcell Ozuna contributed two hits each in the seven-inning contest for the Braves.

Rhys Hoskins had two hits for the Phillies, who managed only four as a team. The Phillies left six runners on base.

Freeman slammed a two-run homer to left to give the Braves an early 2-0 lead in the third inning.

In the third, Hoskins doubled with two outs, but Harper struck out swinging to end the threat.

Acuna led off the fifth with a towering opposite-field homer to right for a 3-0 Braves advantage. Freeman tripled to right with one out and Harper appeared to tweak his ankle while tracking down the baseball in the corner. Harper did remain in the game.

After Howard was lifted for Trevor Kelley, d'Arnaud doubled home Freeman for a 4-0 lead.

Hoskins came to the plate in the fifth with Andrew McCutchen on first and Scott Kingery on second with two outs and was hit by a pitch. Harper came up with the bases loaded and flied out to center.

Acuna added a two-run homer off Kelley in the sixth for a 6-0 advantage. Freeman also added an RBI double for a 7-0 lead. Ozuna's RBI single pushed the lead to 8-0.

The Phillies went down in order in the seventh to end the game.