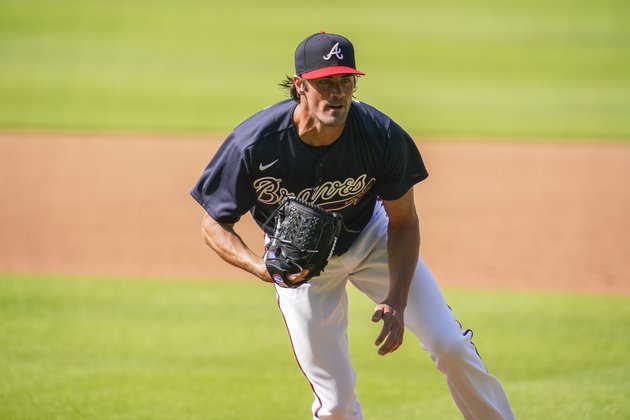 Another injury to their starting rotation has tossed the Atlanta Braves' pitching plans into a tizzy, but the club continues its march toward its third straight National League East title.

The Braves and Marlins meet in the second game of their four-game series on Tuesday. Atlanta (32-22) holds afour-game lead over Miami (28-26) and a five-game advantage over Philadelphia (27-27).

The Braves trimmed their magic number to three with Monday's 5-4 win over the visiting Marlins. Miami's magic number for securing second place is five. The Marlins are trying to make the playoffs for the first time since 2003, when they won the World Series.

"There's no message for these guys right now," Miami manager Don Mattingly said. "They know where they're at. They've put themselves in a good position."

The Braves had planned to use veteran Cole Hamels in the second game of the series, but instead the left-hander was placed on the injured list with shoulder fatigue and will miss the rest of the season.

The high-priced free-agent who was signed in December missed the first eight weeks of the season while recovering from left triceps tendinitis. He made an encouraging season debut on Sept. 16 against Baltimore, lasting 3 1/3 innings and allowing three runs.

Hamels missed all of spring training with left shoulder inflammation and developed the triceps issue one week into summer camp. He was expected to make two more starts before the end of the season. General manager Alex Anthopoulos has already contacted the league to have Hamels removed from the team's postseason pool.

"I hate it for him. He's worked so hard and put so much time in," Atlanta manager Brian Snitker said. Hamels went out to throw on Monday and "couldn't get anything behind it. It just wasn't what he expected. He didn't feel like he would be able to get stretched out and do anybody any good."

The Braves have already lost ace Mike Soroka for the season with a torn Achilles, and were without current No. 1 starter Max Fried for 10 days with back spasms.

Wilson was recalled from the alternate training site, where he was scheduled to pitch on Tuesday. It will be Wilson's first start; he has made four relief appearances, including a four-inning stint against Miami on Sept. 9 when he allowed one run on four hits and two walks.

Urena will be making his fourth start since being activated. He looked good in his most recent outing on Thursday, a loss to the Boston Red Sox. He allowed two runs over 5 2/3 innings.

Urena made his season debut against the Braves on Sept. 7 and allowed three runs in five innings. The appearance had its controversy when Urena hit two batters, including Ronald Acuna Jr. It brought back bad memories of the 2018 incident where Urena hit Acuna with the first pitch of the game and set off a benches-clearing brawl.