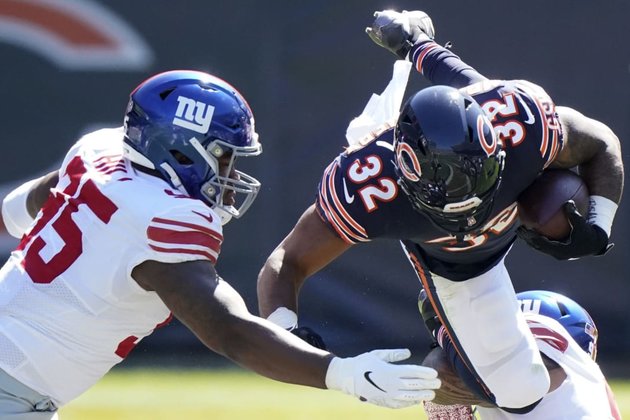 Notes and statistics from the Giants' 17-13 loss to the Chicago Bears in Soldier Field:

*The Giants' record in road openers fell to 50-41-5. They have lost five consecutive games to NFC North teams since beating the Bears two years ago.

*The Giants lost despite shutting out their opponent in the second half. The last time that happened was on Nov. 21, 2004 vs. Atlanta - Eli Manning's first start at quarterback. In that game, the Giants faced a 14-0 halftime deficit and lost, 14-10.

*The Giants' 17-point halftime deficit was their largest since Sept. 22, 2019 - Daniel Jones' first game as the starting quarterback - when they trailed at Tampa Bay after two quarters, 28-10. The Giants rallied to win that game, 32-31. The deficit at the half in Chicago was the Giants' largest in a game they lost since Oct. 11, 2018 vs. Philadelphia. They trailed 24-6 in a game in which the final score was 34-13.

*The Giants fell to 0-2 for the fourth consecutive season and for the seventh time in eight years.

*The Giants' 95-yard touchdown drive spanning the third and fourth quarters was their longest scoring march since they put together a 97-yarder - on their previous visit to Soldier Field, on Nov. 24, 2019.

*The Giants totaled 295 offensive yards after finishing with 291 yards in their opener vs. Pittsburgh.

*Chicago scored a touchdown on the game's opening drive when Mitch Trubisky and running back Robert Montgomery teamed up on a 28-yard scoring pass. It was the first first-possession touchdown by a Giants opponent since Washington's Steven Sims, Jr. caught a 10-yard pass from Dwayne Haskins in Week 16 last year. In the previous five seasons, the Giants were 5-12 in games in which their opponents scored a touchdown on their opening offensive series.

*Montgomery's 28-yard touchdown reception was the longest by a running back against the Giants since Dec. 10, 2017, when Dallas' Rod Smith scored on an 81-yard catch and run. Smith is currently on the Giants' practice squad.

*Although he was limited to four carries and left the game early in the second quarter with a knee injury, Saquon Barkley led the Giants with 28 rushing yards.

*Barkley did not catch a pass, ending at 30 his Giants-record streak for the most consecutive games with a reception by a running back to start a career in a Giants uniform.

*Wayne Gallman was inactive, so eight-year veteran Dion Lewis was the only other running back to carry the ball. He finished with 20 yards in 10 attempts. That was his second-highest number of carries in his last 21 games; last Dec. 22, he ran 15 times (for 68 yards) for the Tennessee Titans vs. New Orleans.

*Lewis also had four receptions for 36 yards, his highest number of catches since he had five at Carolina for the Titans on Nov. 3, 2019.

*Lewis scored the Giants' only touchdown - his first for the team - on a one-yard run to cap the 95-yard drive 42 seconds into the fourth quarter. It was his first rushing touchdown since Sept. 9, 2018, a four-yard run with Tennessee at Miami. He caught one touchdown for the Titans in 2019, on an 11-yard reception vs. Houston on Dec. 15.

*Daniel Jones completed 25 of 40 passes for 241 yards, no touchdowns and one interception for a passer rating of 68.9. It was the first time in his 14 career starts that Jones did not throw a touchdown pass. His streak with at least one scoring throw in 13 consecutive games to start his career is the fourth-longest in NFL history, behind Kurt Warner (23), Baker Mayfield (17) and Brad Johnson (15).

*In addition to his interception - his third - Jones lost a fumble.

*Tight end Evan Engram led the Giants with six receptions for 65 yards - all in the second half.

*Golden Tate, who missed the season-opening loss to Pittsburgh because of a hamstring injury, led the wide receivers with five catches for 47 yards.

*Sterling Shepard suffered a toe injury late in the first half, played just one play in the second, and caught two passes for 29 yards.

*Safety Julian Love and cornerback James Bradberry both intercepted Trubisky in the second half. Both plays were unusual. In the third quarter, Trubisky's pass to Allen Robinson was tipped by James Bradberry and floated to Love, who returned the ball 13 yards to the Chicago 25, leading to a Giants field goal. Early in the fourth, Bradberry had his back to Trubisky while covering Robinson. When the receiver got his hands on the ball, Bradberry stole it at the Giants' 34-yard line.

Bradberry said, "I think so" when asked if it was his first pick without first seeing the ball.

"I was in man-to-man on that side of the field," Bradberry said. "He gave me an outside release, I tried to get hands on him at the line, then I felt the ball in the air - of course, I didn't see it because I had my eyes on him - and I was going to make a play through his arms and I just happened to be in the right spot at the right time. I was able to get one hand on it and pull it through as I came to the ground."

*Love's interception was the second of his career (both against Trubisky and the Bears), while Bradberry's was his ninth and first with the Giants.

*The Giants sacked Trubisky four times - one each by linebackers Blake Martinez, Kyler Fackrell and Lorenzo Carter and defensive tackle B.J. Hill. Martinez had the only second-half sack. All picked up their first sacks of the season.

*The sacks for Martinez and Fackrell were their first with the Giants. Martinez last had a sack in the 2019 season finale for Green Bay vs. Detroit. Fackrell picked up his first solo sack since Dec. 30, 2018 - also for the Packers against the Lions. Last year, Fackrell had two half-sacks for Green Bay.

*Both Carter and Hill had recorded their most recent sacks last Dec. 22 in Washington, the former with a three-yard tackle of Haskins and Hill with an 11-yard takedown of Case Keenum.

*Martinez led the Giants in tackles for the second week in a row, this time with eight (six solo).

*Graham Gano kicked field goals of 39 and 37 yards. On the final play of the first half, he was wide left on a 57-yard attempt that would have tied the longest field goal in Giants history had it been good.

*The game's oddest play occurred on a fourth-and-two from the Bears' 36-yard line on Chicago's final possession. Trubisky threw over the middle to tight end Jimmy Graham. The ball was tipped by Martinez and sailed into the arms of right tackle Bobby Massie, who gained four yards.

"I'm not going to lie to you, it was a tough situation," Martinez said. "Obviously, knowing that that play was coming, I knew there was going to be a late leap by the tight ends. I was expecting it and to break it up and it goes straight to an offensive lineman. It's something you don't expect. Obviously, you're hoping it goes the other way to one of our defensive linemen. At that point, you have to be professional and get ready for the next set of downs and stop them and get to that position to miss that field goal (a 50-yard attempt by Cairo Santos)."

*Massie's reception was the first by an offensive lineman against the Giants since Sept. 10, 2000, when Philadelphia center Bubba Miller caught a Donovan McNabb pass that was tipped by defensive tackle Keith Hamilton. Miller gained nine yards.

*Defensive back Logan Ryan made his first start for the Giants as an extra defensive back.

*Defensive backs Sean Chandler and Ryan Lewis were activated off the practice squad on Saturday. Chandler had one tackle. Lewis was in uniform but did not play.

*The home team has won the last six games in the Giants-Bears series.

* Martinez represented the Giants at the pregame coin toss. In the opener, it was safety Jabrill Peppers. Unlike past seasons, teams are permitted to send just player onto the field for the pregame toss.