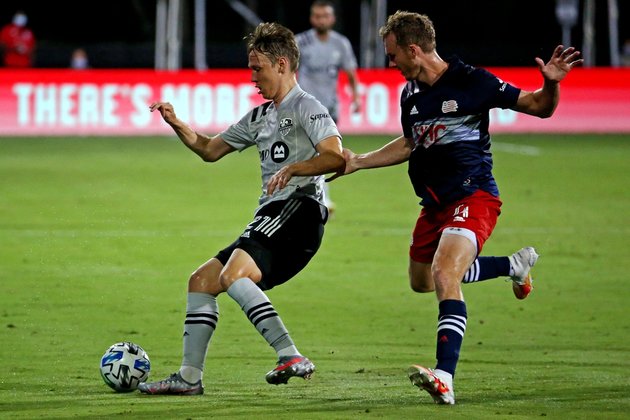 The New England Revolution are looking for a homefield breakthrough when they host the Montreal Impact on Wednesday.

The Revs (3-3-6, 15 points) are 0-1-4 in home games this season. The winless streak continued with a 0-0 draw against New York City FC last Saturday that had the Revolution feeling "like we left points on the table," defender Henry Kessler said.

"We feel at home we should be grabbing three points. ... It wasn't really a game where we see it as one point earned, but rather two points lost," Kessler said.

New England is tied for third among all teams for both fewest goals allowed (11) and fewest goals scored (10). The Revolution are also tied with the Houston Dynamo with the most draws (six) of any team this season.

Despite the even-steven nature of the Revs' season, New England is just a point behind Montreal (5-6-1, 16 points) for sixth place in the Eastern Conference.

The Impact are 0-2-0 in their last two games, including a 4-1 loss to the Philadelphia Union on Sunday. Montreal's Romell Quioto scored five minutes into the game but then received a straight red card in the 15th minute for elbowing Union defender Mark McKenzie, opening the door for a Philadelphia rout.

It was the third straight game that Montreal has been reduced to 10 men due to a red card, and the second consecutive game that the ejection came in the first half. Rudy Camacho's 37th-minute red card similarly hampered the Impact in a 3-1 loss to the Vancouver Whitecaps on Sept. 16.

"When you receive a red card so early, it makes the game very difficult," defender Jukka Raitala told the Montreal Gazette. "The way we received those red cards should not happen. ... It's unacceptable."

Quioto is suspended for Wednesday's game. Camacho and Emanuel Maciel will be available against the Revolution after completing their own red card suspensions.

The Revolution's Matt Polster is also available for selection after a one-game red card suspension.

This is the third meeting of the season between the teams. The Impact recorded a 2-1 win in Montreal on Feb. 29, and the Revolution notched a 1-0 result on July 9 during the MLS Is Back tournament.