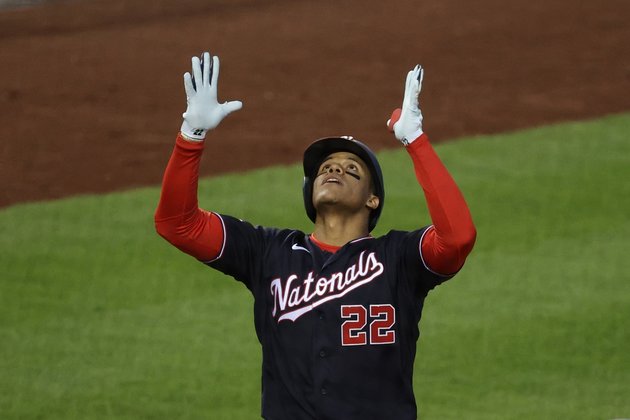 Yadiel Hernandez's first career homer was a two-run walk-off shot in the bottom of the eighth inning Tuesday, lifting the host Washington Nationals past the Philadelphia Phillies 8-7 in the second game of a doubleheader.

The Nationals won the opening game, 5-1.

Hernandez finished 2-for-4 with three RBIs in the nightcap. He had eight career at-bats in six games before the outburst.

Nationals starter Paolo Espino, who was making his first major league appearance since 2017, gave up seven hits and three runs in four innings. Espino struck out four and walked none.

Daniel Hudson (3-2) earned the win despite giving up an unearned run in the top of the 10th.

Scott Kingery homered and Didi Gregorius added two hits and two RBIs for the Phillies (27-29), who have lost four in a row.

Alec Bohm and J.T. Realmuto had two hits each for the Phillies, who took a 7-6 lead in the top of the eighth.

Philadelphia's David Hale pitched the first inning of a bullpen game in which six relievers appeared. Brandon Workman (1-4) took the loss after serving up Hernandez's homer.

The Phillies struck initially when Gregorius doubled to left and Andrew Knapp hit an RBI single for a 1-0 lead in the second inning. Roman Quinn added an RBI single to center for a 2-0 advantage as Knapp's headfirst slide just beat the tag.

In the third, Stevenson hit an RBI single, scoring Michael A. Taylor to close the Nationals within 2-1. JoJo Romero replaced David Phelps and allowed Soto's three-run blast as Washington moved ahead 4-2.

Kingery lined a solo homer over the fence in left and the Phillies got within 4-3 in the fourth.

The Nationals extended their lead to 5-3 in the fourth when Hernandez picked up his first major league RBI with a double to left, scoring Eric Thames from first base.

Gregorius ripped a two-run double off Wander Suero in the fifth to cut the deficit to 6-5.

The Phillies tied the game at 6 in the sixth when Realmuto reached safely on an RBI infield single.