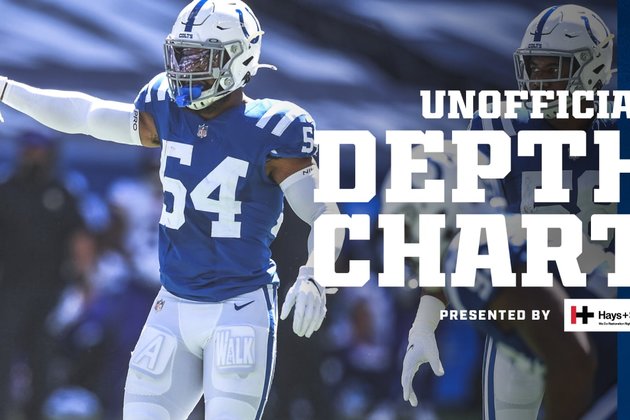 What does the Indianapolis Colts’ unofficial depth chart look like for Sunday’s 2020 Week 3 matchup against the New York Jets? We take a position-by-position look heading into the contest. Andrew Walker

INDIANAPOLIS - The Indianapolis Colts (1-1) on Sunday play host to the New York Jets (0-2) in their 2020 Week 3 matchup at Lucas Oil Stadium - and, accordingly, it's time to look at the team's unofficial depth chart for the game.

Here is a position-by-position look for the Jets matchup, with some notes for each unit:

» Two changes this week to the Colts' unofficial depth chart, with at least another one coming - and all are injury-related. No longer is Marlon Mack (Achilles injury, out for season) listed at running back, and Daurice Fountain, who was elevated to the active roster from the practice squad last Wednesday, is now listed at one of the wide receiver spots. Also, Parris Campbell is still listed here, but he went down with a knee injury early in the Colts' Week 2 victory over the Minnesota Vikings, so there's a chance he could be placed on IR (with the chance to return) and, accordingly, taken off the unofficial depth chart.

» We knew rookie Jonathan Taylor would be getting his first-career start last Sunday against the Vikings, and he excelled, earning his first touchdown and first 100-yard rushing performance (you can, and should, vote for Taylor to win the NFL's Rookie of the Week award by clicking here). But head coach Frank Reich had an interesting gameplan at the running back position behind Taylor against the Vikings; it was Jordan Wilkins who had the second-most offensive snaps (17) and touches (nine carries for 40 yards), while Nyheim Hines, who is usually the third-down back and top pass-catching option out of the backfield, had just nine offensive snaps and one reception for four yards. Reich has lots of ways he can move and shake the running back position each and every week, depending on how he wants to attack the opposing defense.

» Sunday's game against the Vikings also featured an interesting plan at the wide receiver position, where rookie Michael Pittman Jr. (67 offensive snaps) and Zach Pascal (59 snaps) were out there the most over No. 1 receiver T.Y. Hilton (42 snaps). Perhaps Pittman Jr. and Pascal's run-blocking abilities made them even more valuable in this one. Also, with Campbell going down with a knee injury early in the first quarter, we saw Fountain (15 snaps) and Ashton Dulin (six snaps) get some added opportunities with the offense.

» At the tight end position, of course Mo Alie-Cox led the way with a career day filling in as the starter for the injured Jack Doyle: five receptions for 111 yards, which equates to a terrific 22.2 yards-per-reception average. But the two undrafted rookie tight ends behind Alie-Cox deserve a ton of credit, as well: Noah Togiai, who was just claimed off waivers from the Philadelphia Eagles the first week of the season, made his NFL debut and logged 37 offensive snaps, and was a key part of the Colts' successful run game. Farrod Green, who was just elevated to the active roster from the practice squad on Saturday, also made his NFL debut and played five offensive snaps (Green reverts to the practice squad to begin this week, however).

- No changes this week compared to last week, but there will certainly be one notable change by next week's unofficial depth chart, as starting safety Malik Hooker will miss the rest of the season after suffering an Achilles injury during the first half of last Sunday's victory over the Vikings, according to Reich. Rookie Julian Blackmon, who made his NFL debut against the Vikings and had two tackles and two passes defensed - one of which was tipped to fellow safety Khari Willis for an interception - could be in line for a much larger role moving forward.

- The Colts' defensive line continued its terrific momentum forward in the win over the Vikings, as the team logged three sacks, forced a safety, hit quarterback Kirk Cousins seven times in all and helped force three interceptions on the day. DeForest Buckner led the way with three tackles (one for a loss), 1.5 sacks and four quarterback hits, while he also forced the safety on Cousins. Tyquan Lewis continued the momentum from a strong training camp into this contest, as he finished with two tackles and a sack, while Justin Houston added a half-sack.

- The Colts shook things up at the linebacker position a little bit against the Vikings; Darius Leonard, of course, played all 54 defensive snaps on the day, but behind him was Bobby Okereke with 46 defensive snaps, followed by Anthony Walker with 30 defensive snaps. Usually Walker, the primary MIKE linebacker, is on the field more than Okereke, the primary SAM linebacker, but defensive coordinator Matt Eberflus obviously had something different in this gameplan.

- Starting cornerback Rock Ya-Sin was a last-minute addition to the inactives list just before last Sunday's game, as he was treated at a hospital for what Reich later classified as a "non-football-related illness; the team started out at cornerback with Kenny Moore II and Xavier Rhodes, but T.J. Carrie (40 defensive snaps) and rookie Isaiah Rodgers (18 defensive snaps) also got some time at cornerback throughout the afternoon, especially after Rhodes exited the game with cramps. The Colts' cornerback group had a solid afternoon, logging a combined seven tackles, five passes defensed and two interceptions (Moore II and Carrie).

- No changes this week compared to last week.

- Long snapper Luke Rhodes deserves a tip of the cap for one of those "you won't find it in the boxscore, but it was a huge play" moments last Sunday against the Vikings. His all-out hustle to keep a Rigoberto Sanchez second-quarter punt out of the end zone, which was downed by George Odum at the Minnesota 2-yard line, gave Cousins & Co. no room to work, and four plays later, he was brought down by Buckner in the end zone for a safety, making it 9-3 and giving the Colts all the momentum they needed the rest of the way.