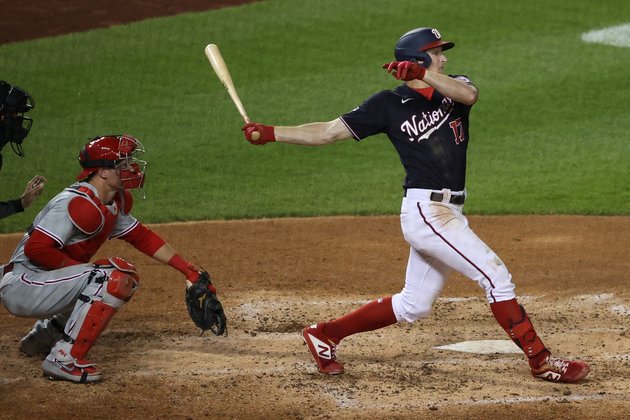 The reeling Philadelphia Phillies will look to work their way back into the playoff race when they battle the host Washington Nationals on Wednesday.

The Nationals, who almost certainly won't make the playoffs to defend their World Series title, will shoot for a four-game series sweep.

The Phillies were swept in a doubleheader Tuesday, 5-1 and 8-7 in eight innings, to fall to 27-29 and below the cut line for the postseason with four games remaining. Philadelphia has dropped four in a row.

The latest defeat was particularly rough, with Brandon Workman allowing a walk-off, two-run home run to Yadiel Hernandez in the bottom of the eighth inning.

The Philadelphia bullpen has scuffled all season.

"For whatever reason, it hasn't happened here," Phillies manager Joe Girardi said of the relievers. "It's extremely frustrating."

Bryce Harper, who has been dealing with a sore back, went 0-for-5 with three walks in the doubleheader, and his average dipped to .247. J.T. Realmuto played both ends of the twin bill after missing the previous 11 games with a hip injury. He appeared to wince after hustling to first base on an infield single in the second game.

Harper refuses to make excuses for anything.

"We're a team that has to go out there and play games no matter what," Harper said. "We have to win and get into the first round and get going. There's no time to complain. There's no time to say, 'Oh, I don't feel good,' or, 'Poor me.' I don't like that mentality anyway."

The Phillies will turn to right-hander Zach Eflin (3-2, 4.28 ERA) to try and avoid a fifth straight loss. In his career, Eflin is 3-3 with a 4.43 ERA in eight starts against the Nationals.

In Fedde's career, he's 2-3 with a 5.57 ERA against the Phillies in seven games, six of which were starts.

Fedde's last start was quite impressive as he tossed six scoreless innings on the road against the Miami Marlins. Fedde allowed only one hit, struck out six and walked two.

"That was the key for him, utilizing his fastball and pitching both sides of the plate," Nationals manager Dave Martinez said. "He did that really well. Really well. I'm proud him."

Fedde has been inconsistent with his command throughout the season. His last outing might have been his best, however.

"I think this was as close to a best-case scenario," Fedde said. "I think I was able to be really effective inside and I think it opened up the down and away for late in the count and something that was really effective for me. It's nice when you can hit your spots consistently."

The homer by Hernandez on Tuesday was the first of the 32-year-old's major league career after more than 900 plate appearances in both international and minor league action.

While Hernandez was the hero, outfielder Andrew Stevenson continued his stellar play, especially in the nightcap with two hits and two RBIs.

"He's working good at-bats, but I've seen Stevenson now for a couple of years," Martinez said. "He's a guy that grows on you. He plays the game hard. He works good at-bats. It always seems like he's 3-2 every count."