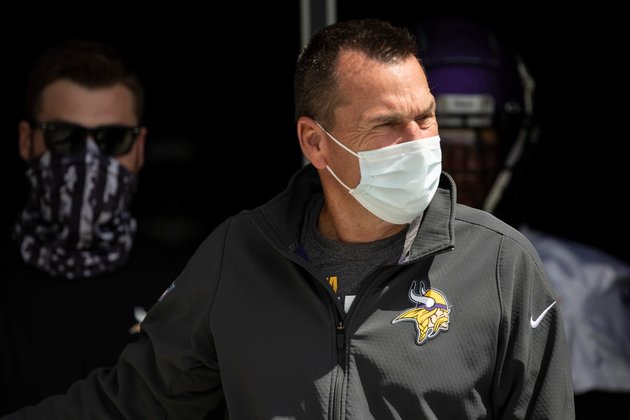 The Vikings have struggled on all three phases in their first two games, starting 0-2 for the first time since 2013, the season before Mike Zimmer took the helm.

On offense, Minnesota started out solid against the Packers and Colts but in both games experienced costly second-quarter stalls.

What is the solution?

With the Tennessee Titans (2-0) coming to U.S. Bank Stadium this weekend, the question needs answering: Can the Vikings offense be fixed?

The simple answer is yes. I have never been one to really critique my former coach Gary Kubiak, but there are some real issues with the game plan right now. This offense up front is made up of good zone-run blockers who move their feet and pave the way for Dalvin Cook﻿, but we're seeing this group regularly get beat on obvious passing situations.

Carr pointed to Minnesota's lackluster numbers in the passing game and noted that in Indianapolis, Cook had 12 carries and two catches.

Cook is the team's best playmaker and must get the ball at least 25 times per game. The Vikings have done quite well being a run-centric offense in the past, and this isn't the year to get away from that with a shallow wide receiver corps and a young, banged-up defense.

Right now, the unit is running through [Adam] Thielen, who has 16 targets in two games (nine more than any other Vikings player), and it's not working.

[Kirk] Cousins hasn't been sharp with poor reads and late throws, and the [pressure] (remember, two safeties this season) isn't helping. The thing is, there hasn't been just one weakness on the offensive line (which has given up five sacks in two games), but more so a carousel of mistakes by multiple guys.

The best way to get everyone in this offense comfortable is by being boring and running the ball through Cook. Then Cousins can pop a play-action pass.

Through the first two games of the 2020 season, 11 NFL teams remain winless, including the Vikings.

USA TODAY's Nate Davis took a look at each team and opined "who still has hope to turn the season around and reach the playoffs" in January. Davis wrote:

However - as with most aspects of daily life in 2020 - there's a significant asterisk attached to this season, which will be the first (non-strike) campaign to feature 14 playoff entries. It stands to reason that clubs which are presently winless probably have a better than 12-[percent] shot of advancing.

Davis ranked the 11 teams - from most likely to least - in terms of their ability to rebound into postseason form. He topped his list with Atlanta, Philadelphia and Houston, followed by Minnesota at No. 4.

Davis noted that the Vikings upcoming schedule could work against them as they try to bounce back.

In their first six years under Mike Zimmer, [the Vikings] reached postseason in 2015, 2017 and 2019 ... so this may not be their year. The schedule isn't very friendly, either, with the Titans, Texans, Seahawks, Falcons and Packers coming down the pike. Defensively, a team that has just two sacks can't compensate for its young corners ... especially problematic on days when QB Kirk Cousins [is struggling]. The schedule seems to relent in November and December, but can the Vikes stay afloat that long?

Davis placed division-rival Detroit just below Minnesota at No. 5.

So competitive with QB Matthew Stafford in the first half of last season, [the Lions have] now lost 11 consecutive games - the past two with Stafford, including an ugly beatdown at Green Bay on Sunday. The return of WR Kenny Golladay, who led the NFL with 11 TD grabs in 2019, would really help - especially with the Cardinals and Saints up next. Detroit has several other good players, too, but there's no time to waste - especially with the NFC North rival Bears off to a surprise 2-0 start (including a Week 1 comeback at Detroit).

The final six 0-2 teams ranked by Davis were the Bengals, Dolphins, Broncos, Panthers, Giants and Jets.

Under Center with Kirk Cousins

Vikings QB Kirk Cousins is back again to team up with legendary sports anchor Mark Rosen to deliver unique content via "Under Center with Kirk Cousins." The series features conversations with current Vikings players, prominent Minnesotans and guests with personal connections to Kirk. Other segments will focus on game reaction with sound from press conferences and the locker room. Cousins and Rosen will also look ahead to the next week's matchup.