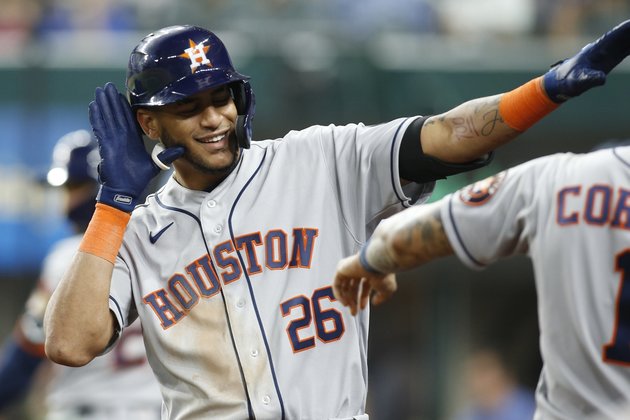 With right-hander Jake Odorizzi exiting due to a right foot injury of undetermined severity, the Houston Astros might have considered their blowout road victory over the Texas Rangers on Monday costly.

However, it was difficult to view the events of Monday night negatively considering the performance of rookie outfielder Jose Siri. A longtime minor-leaguer who made his big-league debut on Sept. 3, Siri homered twice, drove in five runs and finished 4-for-5 in the Astros' 15-1 victory.

The 26-year-old Dominican Republic native will seek an encore on Tuesday in the second game of the four-game series.

"I feel really happy," Siri said. "I feel proud of myself."

In what Astros manager Dusty Baker called a "tremendous night," Siri capitalized on a chance to start with veteran Michael Brantley slowed by knee soreness. Baker viewed Siri as the best option considering the combination of his speed and the expanse in left field at Arlington, Texas.

"We needed it," Baker said. "He's worked hard for it, been in a few organizations. When we got him in spring training, we liked his skill level. He has power, he has speed, he has a tremendous arm. Sometimes it takes a guy some time to get it together."

Right-hander Zack Greinke (11-5, 3.66 ERA) will get the start for the Astros on Tuesday. Greinke faced Texas in his most recent start, allowing six runs on nine hits and two walks with one strikeout over four-plus innings in the Astros' 13-2 road loss on Aug. 29. He is returning from a stint on the COVID-19 injury list.

Right-hander Jordan Lyles (8-11, 5.43 ERA) is the scheduled starter for the Rangers. He is coming off his second relief appearance of the season on Sept. 7. Lyles tossed seven innings and allowed one run on three hits and two walks with three strikeouts while working in tandem with rookie right-hander Spencer Howard in Texas' 3-1 win at Arizona.

Lyles, who recorded a quality start in his most recent start, against Colorado on Aug. 31, and is 3-1 with a 4.81 ERA over his past four outings.

The Astros (84-59) made things difficult for a pair of rookie Rangers right-handers on Monday. Howard and A.J. Alexy combined to allow 12 runs on 10 hits and five walks over five innings.

Howard, acquired from the Philadelphia Phillies at the trade deadline, and Alexy, part of the 2017 trade that sent Yu Darvish to the Los Angeles Dodgers, both have promising futures with the Rangers (53-90).

"Overall it is a good learning moment," Rangers manager Chris Woodward said. "I think more on Howard's case. I think there are some things he's got to fix and clean up. In Alexy's case, he's learned how to face a tough lineup. You've got to execute pitches and you've got to attack them. If you don't, they're going to make you pay."

PARIS, France: Work to shore up Notre Dame Cathedral in Paris has been finished, allowing the long-awaited restoration to begin, ...