Sixers hope to have Joel Embiid vs. winless Pistons 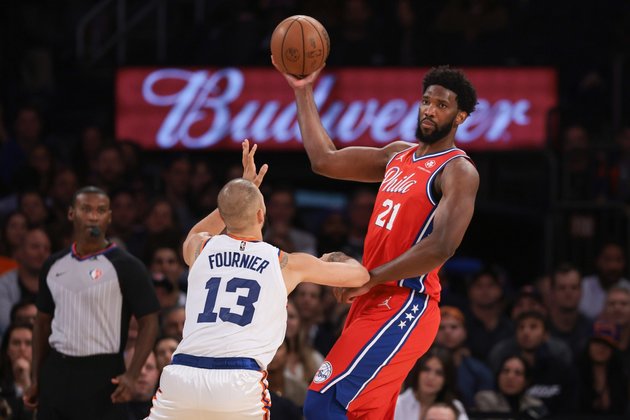 Joel Embiid has suffered through a litany of injuries since joining the league in 2014.

In fact, he missed his first two full seasons.

While Embiid worked his way into a Most Valuable Player candidate last season, he was still sidelined for 21 games with knee and back issues. Embiid also played with a small lateral meniscus tear in his right knee in the playoffs.

Embiid's right knee was banged in the season opener and it has clearly affected his game through the Philadelphia 76ers' 2-2 start. Embiid had only 14 points on 2-of-7 shooting in a 112-99 loss on the road to the New York Knicks on Tuesday.

Embiid is questionable once again when the Sixers host the Detroit Pistons on Thursday.

"It's not an excuse, but I don't think I've played like this to start the season or any stretch in my career so it's not an excuse," Embiid said. "I'm gonna keep pushing and hope for the best."

Without Ben Simmons (personal reasons) and Shake Milton (ankle), the Sixers' offense has been stagnant at times.

Embiid has made a conscious effort to defer to his teammates early in games.

"You can look at the stat sheet even from the previous games, not saying I'm too passive, but it's also I want to get my guys going," Embiid said. "I gotta give them the confidence to believe in themselves and make shots. That's been my mentality trying to figure out how to, coming into the season, to be point center. I'm gonna keep working at it. I'm gonna keep working and I'm definitely gonna get better so that's not gonna last long."

The Pistons have scuffled through their first three games, two losses to the Chicago Bulls followed by a resounding 122-104 defeat to the Atlanta Hawks.

To be fair, the Pistons have been competing without Cade Cunningham, the No.1 overall draft pick from Oklahoma State. Cunningham has been recovering from a sprained right ankle.

"He wants to play," Pistons head coach Dwane Casey said of Cunningham. "The medical people are holding him back. You don't want to rush him back if it's not 100 percent. There are certain movements he has where it's still sore."

Also without last season's leading scorer Jerami Grant (elbow), the Pistons struggled on the offensive end against the Hawks.

Kelly Olynyk and Saddiq Bey led the Pistons with 21 points apiece, but the team shot just 9 of 33 from 3-point territory and committed 14 turnovers.

In addition, the Pistons continue to miss way too many open shots. If they hope to pick up their first win in Philadelphia, the shooting must improve.

"Hopefully, we can start knocking some shots down soon," Josh Jackson said. "That's one thing that we do talk about. We're getting the right ones. We're getting open shots. We move the ball."