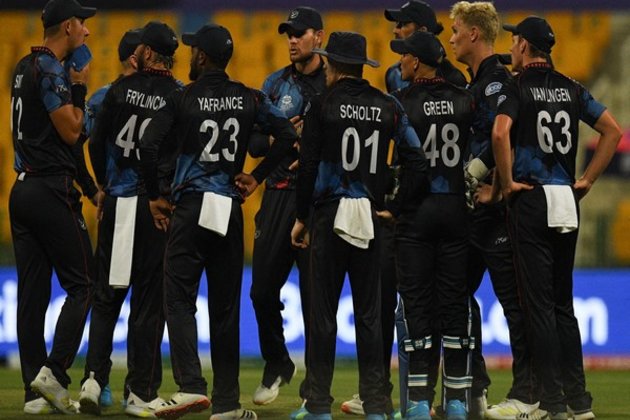 Abu Dhabi [UAE], October 27 (ANI): Namibia kicked off their Super 12 campaign with a victory against Scotland by 4 wickets in the ongoing ICC Men's T20 World Cup at the Zayed Cricket Stadium on Wednesday.

Namibia faced certain difficulties but the team was able to chase the modest target of 110 with five balls to spare. With this win, Namibia went to 3rd spot in Group 2 behind Pakistan and Afghanistan.

Chasing 110, Namibia prefered to go with caution over aggression as it wasn't until the fifth over of the innings that Namibia scored their first boundary off the bat. Opener Michael van Lingen was removed in the last over of powerplay as their score read 29/1.

Zane Green and Craig Williams tried to up the ante but the former fell at the stroke of drinks. At the halfway stage, Namibia needed 54 from the remaining 10 to win the contest. Gerhard Erasmus stay at the pitch was cut short in the 12th over.

Craig Williams soon followed Erasmus into the dressing room in the next over. With the team under the pressure, JJ Smit and David Wiese steadied the ship for the chasing team. Wiese was removed in the 18th over and Jan Frylinck in the penultimate over but until then it was just too late for Scotland. JJ Smit smashed six on the first ball of the last over as Namibia put their first points on board.

Earlier, Namibia bowled splendidly at either end of the innings to restrict Scotland to a below-par total of 109/8. Scotland suffered an early setback as Ruben Trumpelmann's triple-strike in the first over pegged them back.

Only Matthew Cross, Michael Leask and Chris Greaves reached double-digits for Scotland, with Leask leading the way in the middle-overs with a 27-ball 44.