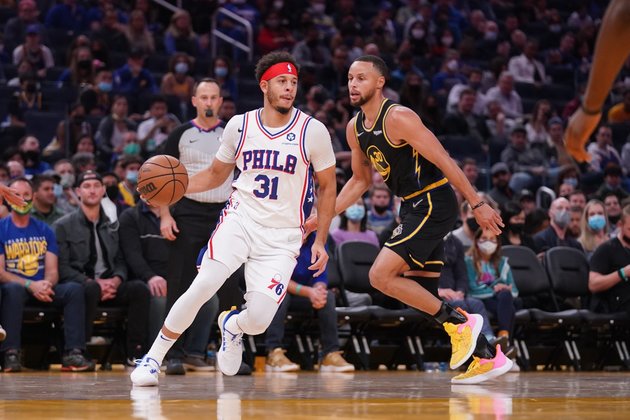 Andrew Wiggins (19 points), Jordan Poole (17), Juan Toscano-Anderson (13), Otto Porter Jr. (12) and Draymond Green (10) also scored in double figures for the Warriors, who rallied from 19 down to record their ninth home win in a row.

All nine of the victories in the home streak have been by 12 or more points.

Tyrese Maxey (19) and Danny Green (10) were the only other 76ers to reach double figures on the final night of a long road trip without star big man Joel Embiid (health and safety protocols).

Philadelphia has lost seven of nine.

Playing the finale of what ended up as a 2-4 trip, the 76ers burst out of the gate to lead 27-13 after Danny Green's second 3-pointer of the game.

A short jumper by Maxey gave the visitors a 55-36 lead with 4:03 remaining in the half before Golden State used a 30-8 flurry bridging the second and third periods to go up 66-63. Stephen Curry had eight points over the 7:18 stretch.

Despite also playing without Tobias Harris (hip), the 76ers pulled even at 88-all in the second minute of the fourth period before Toscano-Anderson had a three-point play, Porter sank a 3-pointer and Toscano-Anderson dunked in an 8-0 burst that gave Golden State the lead for good.

The Warriors, who hadn't played since Sunday, finished the game on a 28-8 run.

Stephen Curry finished 9-for-16, including 6-for-11 on 3-point attempts, to win the head-to-head from brother Seth, who went 8-for-16 overall and 0-for-5 from beyond the arc. Seth made it close in the scoring column with an 8-for-8 night at the free throw line, while Stephen had a 10-0 advantage in assists.

Draymond Green complemented his 10 points with seven assists and a team-nine rebounds.

The 76ers' Andre Drummond was the game's leading rebounder with 12.

U.S. stocks roar back as concerns over Covid variant diminish

Grab app valued at $40 billion in debut on Nasdaq

SINGAPORE: Singapore-based Grab, the major ride sharing app used in South East Asia, has made its stock market debut on ...

After decades of delays, Shell Oil gives up on UK's Cambo oilfield

LONDON, England: Shell Oil announced this week that it has abandoned its plans to develop the Cambo oil field west ...

SYDNEY, NSW, Australia - Stocks in Asia closed modestly lower Monday as markets appeared to be coming to grips with ...

US saw only 210,000 hired in November, falls short of expectations

WASHINGTON D.C.: In a reversal of the predictions of expected job growth issued by economists, U.S. employers hired only 210,000 ...

CHESAPEAKE, Virginia: Discount retail chain Dollar Tree said it will raise its prices from $1 to $1.25 for most of ...

Does Pentagon need three-quarters-of-a-trillion-dollars every year?

Despite a disagreement over some amendments in the Senate, the United States Congress is poised to pass a $778 billion ...

BERLIN, Germany: In a bid to halt the spread of the fourth wave of COVID-19 in Germany, national and regional ...

NEW YORK CITY, New York: A former Netflix software engineer and his friend will serve time in prison after being ...

VIENNA, Austria: A surgeon who amputated the wrong leg of an 82-year-old patient in May, later describing the mistake as ...

MUNICH, Germany: German authorities announced this week that a World War II bomb exploded at a construction site next to ...

LONDON, England: The United States, United Kingdom, European Union, and Canada have agreed to tackle the ongoing migrant crisis on ...