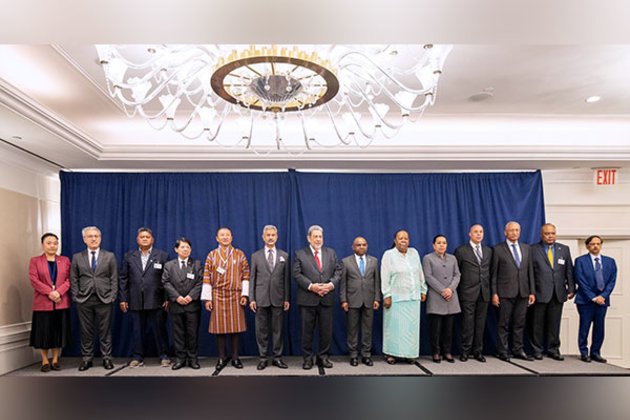 New York [US], September 23 (ANI): External Affairs Minister S Jaishankar on Friday participated in a high-level meeting of the L-69 Group on 'Reinvigorating Multilateralism and Achieving Comprehensive Reform of the UN Security Council' in New York.

"Glad to meet so many colleaguesfriends of the L-69 grouping. The title of our meeting, 'Reinvigorating Multilateralism: A call to Action for Comprehensive Security Council Reform' aptly captured the message of the gathering. The Global South is working together towards this goal."The L.69 Group consists of developing countries from Asia, Africa, Latin America, the Caribbeans and Small Island Developing States, focused on reforms of the UN Security Council.

Besides, he interacted with the Prime Minister of St Vincent and Grenadines, Ralph Gonsalves on the sidelines of the ongoing 77th session of the United Nations General Assembly (UNGA) in New York.

"The best way to start a UNGA day. Called on Prime Minister of St Vincent and Grenadines, Dr Ralph Gonsalves. Appreciate his enormous wisdom on global developments. Received it in the form of his new book: A time of Respair," he tweeted.

Jaishankar, who is on a 10-day visit to the United States, also met with his Saudi counterpart Prince Faisal bin Farhan Al Saud.

"Warmest greetings to FM @FaisalbinFarhan and the Government and the people of the Kingdom of Saudi Arabia. Confident that the Strategic Partnership Council will guide our ties to higher levels," he tweeted.

External Affairs Minister is in the US for the United Nations General Assembly (UNGA) meeting.

On Thursday, he met with German Foreign Minister Annalena Baerbock and the two ministers exchanged views on Ukraine and discussed UN reform.

Jaishankar also met the Foreign Minister of Greece, Nikos Dendias and discussed the ongoing conflict in Ukraine alongside the Mediterranean and Indo-Pacific.

Jaishankar has more than 50 official engagements in total. The highlights of Jaishankar's meetings particularly with developing countries from Asia, Africa, Latin America, the Caribbean and Small Islands are sharply focused on the reform of the UN Security Council.

Jaishankar will address world leaders at the General Assembly on Saturday, after which he will leave for Washington and a meeting with US Secretary of State Antony Blinken. (ANI)

"Many Asian countries, especially Malaysia and Indonesia, show great interest in our defense industry products. Agreements are being signed," Turkish ...

SYDNEY, NSW, Australia - Stocks in Asia made broad brush gains on Thursday despite a sudden upturn in the U.S. ...

CUPERTINO, California: In line with its efforts to move some of its production from China, Apple has announced that it ...

LONDON, England: As Britain adjusts to its first new head of state in 70 years, the government printers responsible for ...

Government of India warns students in Canada about hate crimes

NEW DELHI, India: The Indian government has advised students and other nationals in Canada to be wary of "incidents of ...

MATERA, Italy: In off-the-cuff remarks on September 26, Pope Francis urged Italians to have more children. While in southern Italy ...

WASHINGTON D.C.: The Biden Administration and the Australian government are in discussions regarding the U.S. building the island nation's first ...