Hunger Crisis in Horn of Africa Grows as Drought Persists 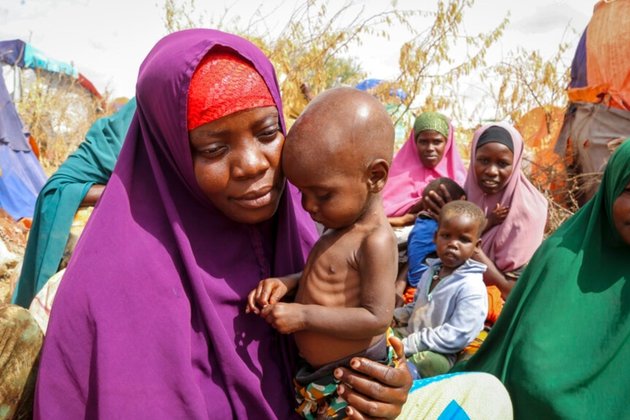 Nairobi, kenya - Aid groups say more than 37 million people in the Horn of Africa are struggling with hunger fueled by a deadly record drought that has killed nearly 9 million animals. The worst situation may be in Somalia, where more than 700 children have died of malnutrition this year.

Exacerbated by the impacts of the COVID-19 pandemic and Russia's war in Ukraine, the global hunger situation is getting worse by the day, according to experts.

Dr. Deepmala Mahla, vice president for humanitarian affairs at CARE International, said the world 'is facing a devastating global hunger crisis, and this is happening in this world of abundance. We are talking about 50 million people just being one step away from starvation."

The crisis has grown especially dire in the Horn of Africa, which is now dealing with a fifth consecutive failed rainy season and a prolonged drought that began in October 2020.

In Ethiopia, Kenya and Somalia, over 36 million people are dealing with chronic hunger, according to CARE International. Experts say Somalia's humanitarian crisis will further deteriorate in the coming months as famine is already projected in two regions of the country.

Alinur Aden, executive director of Gargaar Relief and Development Organization, a humanitarian organization in Somalia, said the 'COVID-19 pandemic, climate change, locust invasion and four years [of] consecutive failure of rain have contributed to all these problems."

Women and children are bearing the brunt of hunger. According to the World Food Program, 942,000 children under age 5 and 135,000 pregnant women and breastfeeding mothers are acutely malnourished and in need of treatment in arid and semiarid regions that are under drought in Kenya.

"We do see already alarming rates of mortality and malnutrition occurring in all the three countries,' said Abyan Ahmed, global humanitarian nutrition adviser at CARE. 'We have seen increased admission rates across those countries in the first quarter of 2022, and the number of severe cases has increased by up to 15% in the last five months, which basically means that in every minute, one extra child is becoming malnourished, severely malnourished and has an increased risk of dying without any intervention."

Mahla said urgent interventions are needed, 'so we call upon world leaders, international communities, governments, to step up. Allocate immediate, flexible, multiyear resources so that we can deliver a humanitarian response to help people now, because the people in the Horn of Africa need for us to act right now and not later."

The U.S. Agency for International Development has provided nearly $1.3 billion in humanitarian assistance in the Horn since 2020.

During his speech to the U.N. General Assembly this week, President Joe Biden pledged $10 billion to fight global hunger, but it was not clear how much of this will go to the Horn of Africa.

Britain has 'too many' low-skilled migrants, interior minister says

SYDNEY, NSW, Australia - Stocks in Asia moved sharply higher on Tuesday despite markets in Hong Kong and Shanghai being ...

Lego closes stores in Russia, being reopened under name World of Cubes

MOSCOW, Russia: After Danish toy maker Lego exited Russia due to Moscow's February invasion of Ukraine, 65 of its stores ...

FORT MYERS, Florida: Areas within Lee County, including Sanibel Island and Fort Myers, Florida, were devastated by winds, rains and ...

Survey reports 66% of US adults say no to Covid boosters

US to purchase $1.1 billion in arms for Ukraine

WASHINGTON D.C.: Pentagon officials have announced that an arms package has been approved for Ukraine worth $1.1 billion, which includes ...

US acts to reduce risks from space debris

ALBUQUERQUE, New Mexico: New Mexico district attorney Mary Carmack-Altwies has said that actor Alec Baldwin and up to four others ...