Aaron Nola pitches Phillies to postseason with win over Astros 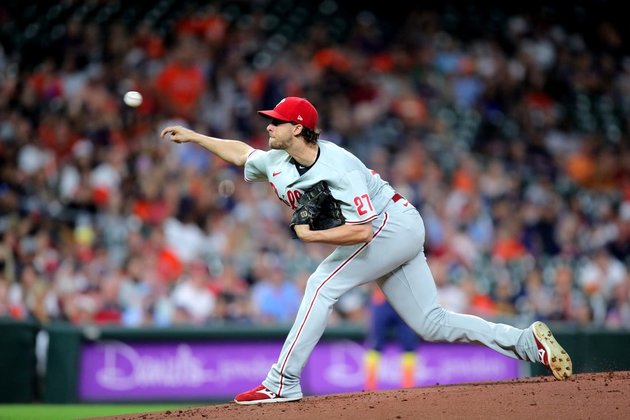 Aaron Nola carried a perfect game into the seventh inning and Kyle Schwarber produced his eighth multi-home run game this season as the visiting Philadelphia Phillies clinched their first postseason berth since 2011 with a 3-0 interleague victory over the Houston Astros on Monday.

The Phillies (87-73) secured the third and final National League wild-card spot with their win, coincidentally in the same ballpark where they last clinched a postseason bid. On Sept. 14, 2011, Roy Halladay tossed a 1-0 shutout against the Astros to lift the Phillies to the NL East title.

He needed only 29 pitches to complete one trip through the Houston (104-56) lineup and had just 55 pitches on his ledger after five innings.

After retiring the first two batters of the seventh, Nola lost his perfect game when Yordan Alvarez dumped a first-pitch fastball into right field. David Hensley followed with a single that chased Nola, who struck out nine over 6 2/3 innings.

Left-handed reliever Jose Alvarado entered and fanned Kyle Tucker to preserve the Phillies' 1-0 lead, one that grew to three runs in the eighth.

Bryson Scott led off the frame with his 10th home run and Schwarber followed with his 46th one batter later, with both blasts going to right field and coming off Astros right-hander Jose Urquidy. Schwarber now has a career-high 94 RBIs.

Astros right-hander Lance McCullers Jr. (4-2) surrendered his lone run on the first pitch of the game. Schwarber ambushed a McCullers sinker and drilled it 394 feet to left-center for his 45th home run, spotting the Phillies a 1-0 advantage.

McCullers later stranded Jean Segura and Stott in scoring position in the fifth inning by retiring Schwarber on a first-pitch flyout. He then struck out the side, all swinging, in the sixth to cap his outing having surrendered one run on six hits and one walk with five strikeouts on 94 pitches.

TOKYO, Japan: The results of a survey released this week showed that Japan's manufacturing activity contracted for the first time ...

ATLANTA, Georgia: As companies look to rein in costs and trim their headcount to brace for an economic slowdown, CNN's ...

HONG KONG: Paving the way for a potential bumper payout to shareholders, HSBC has agreed to sell its business in ...

WASHINGTON D.C.: The National Retail Federation (NRF) has reported that even as inflation has negatively affected many household budgets, heavy ...

WASHINGTON, D.C.: According to a Pentagon report, if China continues with its current nuclear buildup pace, it could have a ...

William, Kate plan US trip in bid to tamp down royal controversies

LONDON, England: Prince William and his wife Kate, the new Prince and Princess of Wales, will travel to the U.S. ...

SYDNEY, Australia: For the first time in eight years, Australia lowered its terrorism threat level from "probable" to "possible," due ...

TRENTON, New Jersey: As part of a project to prevent major wildfires in a federally protected New Jersey forest, up ...

VIENNA, Austria: During a 24-hour strike by Austrian rail workers held this week over issues related to pay, rail traffic ...