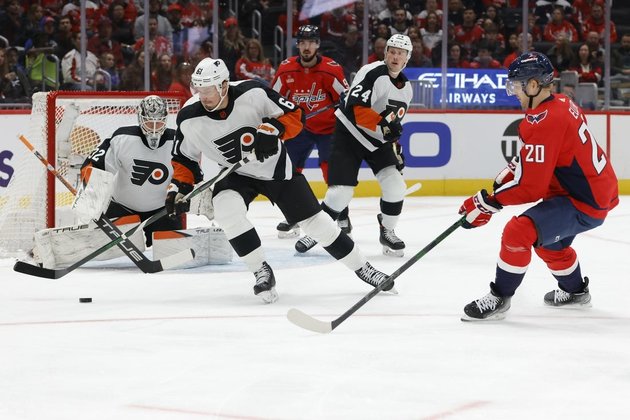 Alex Ovechkin scored at 1:04 of overtime and the Washington Capitals snapped a four-game losing streak with a 3-2 victory over the visiting Philadelphia Flyers on Wednesday night.

Ovechkin, who had fired a shot off the post 15 seconds earlier, blasted a one-timer from the left circle off a pass from Dylan Strome for his 10th goal of the season and the 790th of his career. It also extended his NHL record total for overtime goals to 25.

Philadelphia took a 1-0 lead at the 5:27 mark of the first period on Frost's third goal of the season. Frost drove down the left wing and fired a wrist shot that hit Kuemper in the right shoulder and then fluttered into the net.

Shortly after Nicolas Deslauriers hit the post with a shot that would have increased the Flyers' lead to two goals, Johansson tied it with a power-play goal at 11:05 of the first.

Ovechkin fired a rebound of an Oshie shot from the left side of the crease that slid under Sandstrom's right pad, and Johansson tapped it in right before it crossed the goal line for his fifth goal of the season.

Philadelphia regained the lead at 14:33 of the second period. Ivan Provorov backhanded a bad-angle shot from below the right circle that caromed off Brown stationed by the crease and trickled behind Kuemper for Brown's first goal of the season.

Milano tied it with 2:58 remaining in regulation when he tapped in a cross-crease pass from Evgeny Kuznetsov into a wide-open left side of the goal for his third goal of the season.

Philadelphia nearly won it with 1:25 left in regulation, but Jackson Cates' shot from the bottom of the left circle clanged off the far post and out.

TOKYO, Japan: The results of a survey released this week showed that Japan's manufacturing activity contracted for the first time ...

ATLANTA, Georgia: As companies look to rein in costs and trim their headcount to brace for an economic slowdown, CNN's ...

HONG KONG: Paving the way for a potential bumper payout to shareholders, HSBC has agreed to sell its business in ...

WASHINGTON D.C.: The National Retail Federation (NRF) has reported that even as inflation has negatively affected many household budgets, heavy ...

WASHINGTON, D.C.: According to a Pentagon report, if China continues with its current nuclear buildup pace, it could have a ...

William, Kate plan US trip in bid to tamp down royal controversies

LONDON, England: Prince William and his wife Kate, the new Prince and Princess of Wales, will travel to the U.S. ...

SYDNEY, Australia: For the first time in eight years, Australia lowered its terrorism threat level from "probable" to "possible," due ...

TRENTON, New Jersey: As part of a project to prevent major wildfires in a federally protected New Jersey forest, up ...

VIENNA, Austria: During a 24-hour strike by Austrian rail workers held this week over issues related to pay, rail traffic ...