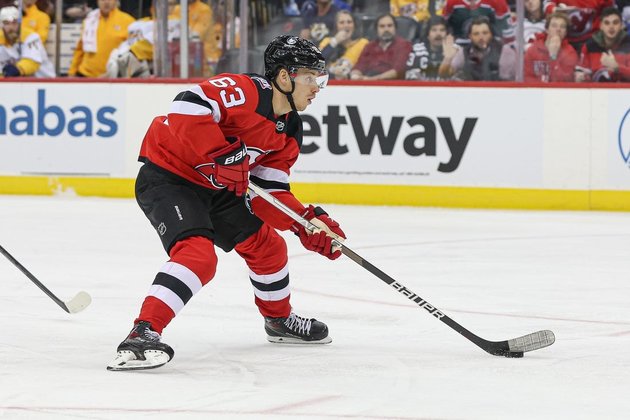 The powerful Devils will arrive in Philadelphia to face the Flyers on Saturday following a rare 4-3 overtime loss to the Nashville Predators on Thursday.

Despite coming up just short, the Devils were disappointed by their lack of execution on the power play against the Predators.

"We stress power play every day of the week," Devils coach Lindy Ruff said. "We practice it every day. We even contemplated having a full team skate just to work on it. I liked what our power play did on the first two. I like what the second unit did. We just don't like that last power play."

Kevin Bahl, Jesper Bratt and Alexander Holtz scored for the Devils. But Miles Wood was a late scratch with an unspecified illness and his status is unclear for Saturday.

The Devils fell behind 2-0 and moved ahead 3-2 but came up just short.

"It comes down to our starts," defenseman Brendan Smith said. "We keep giving and spotting two goals. It makes it tough. I give the guys credit, coming back, playing hard and playing our game but it's hard to do that when you spot a team two."

The Devils will enter this matchup with a stirring 10-1-0 record on the road. The Vegas Golden Knights are the only other team to post at least 10 road victories this season.

New Jersey is 3-1-1 since its franchise-record 13-game winning streak.

The Flyers will look to rebound after one of their most disappointing performances in a 4-1 loss to the Tampa Bay Lightning on Thursday.

After a 10-game losing streak, the Flyers briefly responded with a win over the New York Islanders.

Then a series of turnovers, miscues and mental mistakes hampered the Flyers in the loss to Tampa Bay.

"What I want to watch now is how we handle ourselves after something like this," Philadelphia head coach John Tortorella said. "Because we're embarrassed. And we should be. But how do you handle it? Do you curl up in a ball or do you face the next one head on? Do we have a good practice tomorrow and get ready for our next one? These are lessons we're going to go through."

This week, Flyers defenseman Ryan Ellis was deemed out for the regular season due to a pelvic injury. Sean Couturier, James van Riemsdyk and Cam Atkinson continue to be sidelined with injuries.

Travis Konecny returned to the lineup and scored the team's lone goal against the Lightning.

That goal came after Ian Cole flipped a shot from center ice that bounced off the boards, then ricocheted off Hart's pads and into the net for a 4-0 lead at 9:19 of the third period.

"That might be one of the worst goals I've ever given up," Hart said. "That was tough. It happens. Some bounces go your way, some bounces don't. That one didn't. The best thing about it is it's in the past, so I've just got to put it behind me."