Constitution has withstood the test of time, many creeds and languages have only united us: President Murmu in R-Day address 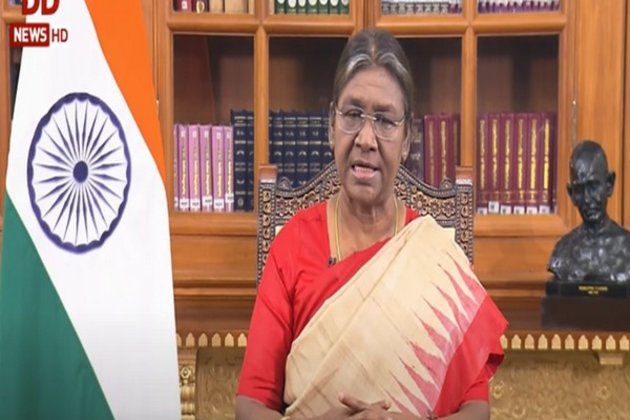 New Delhi [India], January 26 (ANI): President Droupadi Murmu said on Wednesday that India has succeeded as a democratic republic because so many creeds and so many languages "have not divided us, they have only united us" and that this was the essence at the heart of Constitution which has withstood the test of time.

In her address to the nation on the eve of Republic Day, she said India is home to one of the oldest living civilisations and is called the mother of democracy.

"With hope and confidence, we began an experiment unique in the history of humankind. Such a vast and diverse multitude of people coming together as one nation remains unprecedented. We did so with a belief that we are, after all, one; that we are all Indians. We have succeeded as a democratic republic because so many creeds and so many languages have not divided us, they have only united us. That is the essence of India," she said.

"That essence was at the heart of the Constitution, which has withstood the test of time. The Constitution that started governing the life of the Republic was the outcome of the Freedom Struggle. The national movement, led by Mahatma Gandhi, was as much about winning Independence as about rediscovering our own ideals," she added.

The President said the decades of struggle and sacrifice helped win freedom not only from colonial rule but also from the imposed values and narrow world-views.

She said revolutionaries and reformers joined hands with visionaries and idealists to help us learn about our age-old values of peace, brotherhood and equality.

"Those who shaped the modern Indian mind also welcomed progressive ideas from abroad, following the Vedic advice 'Let noble thoughts come to us from all directions'. A long and profound thought process culminated in our Constitution," she said.

"As a modern Republic, however, we are young. In the early years of Independence, we faced countless challenges and adversities. Very high levels of poverty and illiteracy were just two of the many ill-effects of the long foreign rule. Yet, the spirit of India was undeterred. Our founding document is inspired by the humanistic philosophy of the oldest living civilisation in the world as well as new ideas that emerged in more recent history."She said the nation will always remain grateful to Dr B.R. Ambedkar, who headed the Drafting Committee of the Constitution, and thus had a critical part in giving it the final shape.

"On this day, we should also remember the role of jurist B.N. Rau, who had prepared the initial draft, and other experts and officers who helped in making of the constitution. We are proud of the fact that the members of that assembly represented all regions and communities of India and that they included 15 women too. Their vision, as enshrined in the Constitution, has been continuously guiding our Republic," she said.

The President said that during this period, India has been transformed from a largely poor and illiterate nation into a confident nation marching on the world stage.

"This would not have been possible but for the collective wisdom of the Constitution-makers guiding our path. While Babasaheb Ambedkar and others gave us a map and a moral framework, the task of walking that path remains our responsibility. We have largely remained true to their expectations, and yet we realise that much remains to be done to realise Gandhiji's ideal of 'Sarvodaya', the upliftment of all. Yet, the progress we have made on all fronts is encouraging," she said.

The President extended greetings to every Indian, at home and abroad. "From the day the Constitution came into effect to the present day, it has been an amazing journey that has inspired many other nations. Every citizen has reason to be proud of the Indian Story. When we celebrate the Republic Day, we celebrate what we have achieved, together, as a nation," she said. (ANI)

As prices of EVs fall, manufacturer Rivian to reduce workforce by 6%

IRVINE, California: In an effort to cut costs in preparation for an industry-wide price war, electric vehicle manufacturer Rivian Automotive, ...

SANTA CLARA, California: One week after Intel forecasted lower-than-expected sales caused by a loss of market share to rivals and ...

WASHINGTON D.C.: As part of a wider policy drive to increase competition in consumer markets, President Joe Biden has announced ...

OSLO, Norway: Ending a three-year run of profits as stock and bond prices were hit by rising inflation and Russia's ...

US concerned over rights at Mexico auto factory, seeks corrections

WASHINGTON D.C.: The US has again asked Mexico to investigate claims that workers at an auto parts facility of American ...

US ending Covid emergency programs on May 11

WASHINGTON D.C.: The Biden administration said this week that it will end US COVID-19 emergency declarations on 11th May, nearly ...

After 11,000 US flights disrupted, FAA updates its computers

WASHINGTON D.C.: In a letter to lawmakers last week, the US Federal Aviation Administration (FAA) said it had put in ...

WASHINGTON D.C.: The Biden administration has stopped issuing export licenses to US companies seeking to ship most items to China's ...

Nearly a year in, the war in Ukraine has cost tens of thousands of lives and brought the world to ...

After Biden tapped US oil reserves, House passes bill to end such uses

WASHINGTON D.C.: The US House of Representatives has passed a bill that limits the ability of US Energy Secretary Jennifer ...